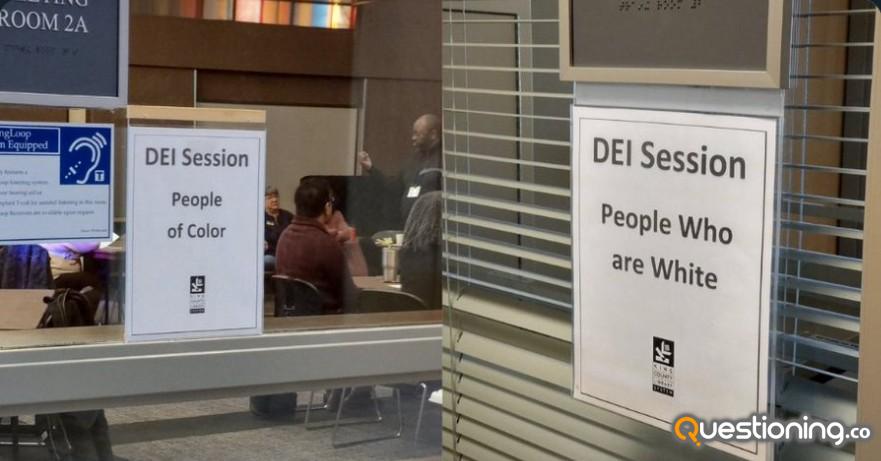 The King County library in Washington State have been holding “separate but equal” training sessions for their employees, all in the name of social justice.

The consultants “begin with an anti-oppression framework” and use segregated sessions in order to root out “institutional privileges and systemic inequities embedded in the current socio-political conditions that influence and affect our institutions.”

The consultants discovered widespread “institutional racism” in the library system—and dismissed employees who reported “not experiencing or witnessing racism while working at KCLS” as likely suffering from the false consciousness of “internalized racism.” When reached by e-mail, Racial Equity Consultants said it was not authorized to comment.

Rufo told The Post Millennial that the pictures of the signs for the training sessions he posted on social media today came from a whistleblower and reminded him “…signs on (segregated) water fountains in the 1950’s.”

King County Prosecutor Dan Satterberg and senior staff have recently required employees to sign a “equity and social justice” pledge and assigned “continued training for white employees,” who must “do the work” to “learn the true history of racism in our country.” Rufo said that every time he writes an article or posts a picture from the sessions, more whistleblowers come forward.

Washington State government officials, especially those in King County and Seattle have been infusing “critical race theory” into their policies and trainings including in public schools.

Earlier this year, The Post Millennial exposed critical race theory practices and curriculum being practiced and taught in Seattle schools. Seattle public schools released a plan to bring students back into the classroom from remote learning, but differentiated the priorities for who should come back first based on many factors involving a measure of those who are most marginalized. Per the guidelines, “students furthest from educational justice,” and “students of color” would be given priority on returning to school for face-to-face instruction.

This past summer, Seattle Public Schools Superintendent Denise Juneau sent an email to students only, saying: “This country has a long history of oppressing people of color, especially Black and African American people. The last couple weeks we have seen demonstrations of systematic racism on full display across our country to the point of murder of Black people. I share in the horror and sadness displayed by the police systems across the country and by some officers here in our own city.”

Students in Washington as young as 11-years-old to refer to a riot as an “uprising” and rioters as “freedom fighters” and that “cops are racist.” Students were even encouraged to donate to bail-funds that have recently been tied to helping release an accused child rapist.