The anti white ADL does not want multiculturalism in Israel, and promotes nationalism there. The total opposite of what they want in the USA. “It is unrealistic and unacceptable to expect the State of Israel to voluntarily subvert its own sovereign existence and nationalist identity and become a vulnerable minority within what was once its own territory.” And yet this is what they promote in western countries.

TUCKER CARLSON (HOST): Demographic change is the key to the Democratic Party’s political ambitions. Let’s say that again for emphasis, because it is the secret to the entire immigration debate.

Demographic change is the key to the Democratic Party’s political ambitions. In order to win and maintain power, Democrats plan to change the population of the country. They’re no longer trying to win you over with their program. They are obviously not trying to improve your life. They don’t even really care about your vote anymore. Their goal is to make you irrelevant.

That is provably true, and because it’s true, it drives them absolutely crazy when you say it out loud. A hurt dog barks.

They scream about how noting the obvious is immoral. You’re a racist if you dare to repeat things that they themselves proudly say. Most people go along with this absurd standard. They dutifully shut up. They don’t think they have a choice.

But no matter what they are allowed to say in public, everyone understands the truth. When you change who votes, you change who wins. That fact has nothing inherently to do with race or nationality. It’s the nature of democracy. It is always true. You can watch it happen, you probably have.

All across the country, we have seen huge changes in election outcomes caused by demographic change. New people move in, and they vote differently.

As a practical matter, it doesn’t matter what they look like or where they are from even. All that matters is that they have different political views.

2013 marks the 20th anniversary of the infamous “Anti-Defamation League (ADL) files controversy”  in which the ADL was discovered infiltrating, spying on and otherwise violating the privacy rights of a large number of anti-Apartheid, civil-rights and peace groups through the unlawful acquisition of private data from corrupt local law enforcement officials.  The single best retrospective is from long-time Middle East analyst and broadcaster Jeffrey Blankfort, who was also among those targeted by the ADL (see, “The Strange History of the Anti Defamation League: ADL Spies“).  Many Americans were outraged in 1993 after reading mainstream press accounts of a vast national ADL spy network with organelles passing information not only to Israel’s Mossad but also Apartheid South African intelligence services—possibly resulting in the mysterious death of Chris Hani and the rushed deportation/detention of many Palestinians.  Declassified FBI files newly reveal not only the flood of constituent letters pouring into Congress and the FBI’s unfulfilled assurances that justice would be served, but the ADL’s use of proven tactics that the Israel lobby has deployed since the 1940’s to skirt accountability for major criminal violations.  The FBI files, originally scheduled for declassification in 2038, were suddenly released to IRmep under the Freedom of Information Act on November 20, 2013 and may now be browsed and downloaded from the Israel Lobby Archive.  It is a timely release since one of Israel’s most harmful spies, Arnon Milchan, is openly boasting about his criminal exploits and Americans may soon demand not only that unsuccessful old law enforcement tactics be retired but new strategies be fielded to punish Israel lobby wrongdoers and end their long stint of immunity.

A March 16, 1993 memo launched the ADL espionage investigation from the FBI’s Los Angeles office.  The FBI discovered “unidentified individuals at the Anti-Defamation League (ADL) in possession of [Federal] Bureau [of Investigation] classified information” along with “confidential police reports and files belonging to the San Francisco Police Department” after the ADL’s Los Angeles and San Francisco offices were raided and searched under warrant.  Until that time, Israel was interested in preserving close economic and military ties (including nuclear weapons sales pitches) to Apartheid South Africa. The ADL, in constant contact with the Israeli consulate which frequently tasked it for help, was eager to pitch in.  The FBI discovered one of its own files possessed by ADL’s Los Angeles division was “a summary of activities relating to the African National Congress (ANC).” The FBI immediately noticed the ADL—which had invested decades securing a forced relationship with the FBI by lobbying top elected officials—was suddenly “uncooperative” and stalling for time. By month’s end, Israel’s “heavy guns” had been drawn to snuff out the fledgling investigation.

Oren Segal, vice president of the Center on Extremism at ADL, emphasized, “It’s a challenge [to identify antifa] because this is not an organized group. You’re essentially looking to try to identify what does somebody believe in.” Antifa has been identified by patches, flags, graffiti and black clothing, Segal explained. And at times, they can be identifiable by moving in “black bloc” formation. But, Segal hedged, looking to identify antifa by these visual cues is “not foolproof.”

ADL: “It is unrealistic and unacceptable to expect the State of Israel to voluntarily subvert its own sovereign existence and nationalist identity and become a vulnerable minority within what was once its own territory.” And yet this is what they promote in western countries. 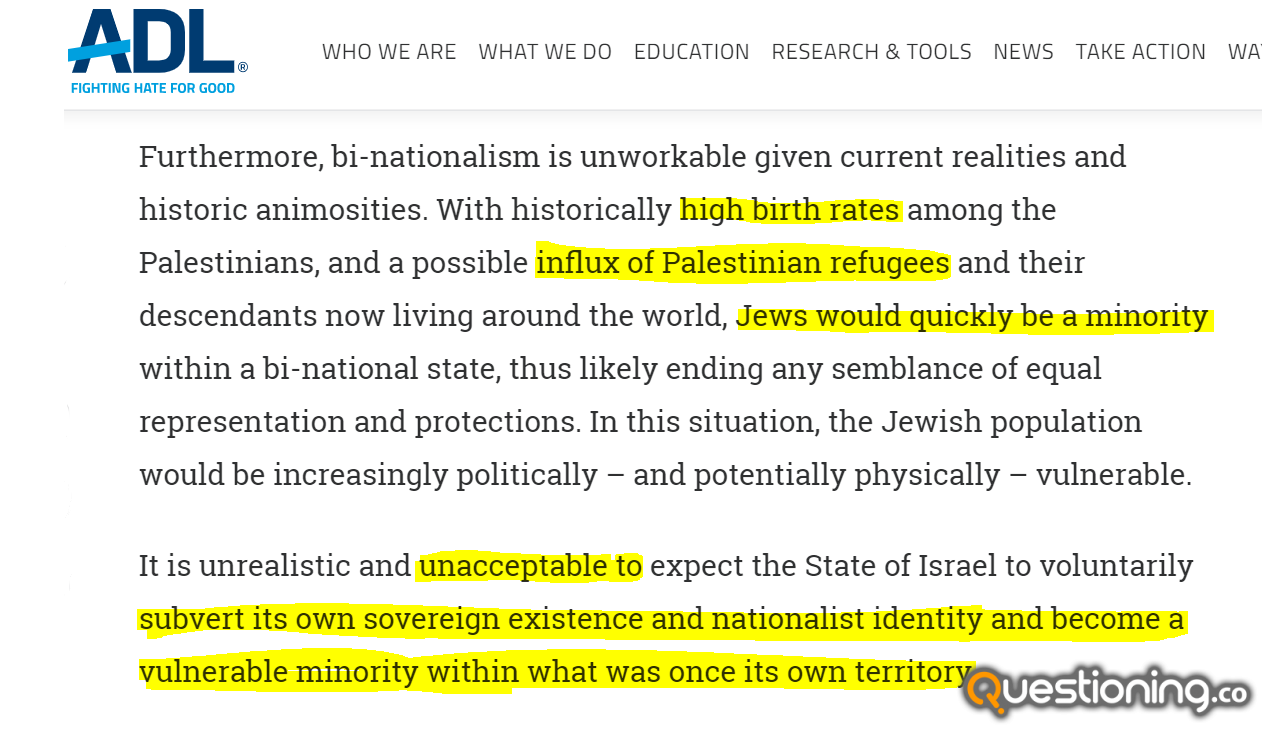 Furthermore, bi-nationalism is unworkable given current realities and historic animosities. With historically high birth rates among the Palestinians, and a possible influx of Palestinian refugees and their descendants now living around the world, Jews would quickly be a minority within a bi-national state, thus likely ending any semblance of equal representation and protections. In this situation, the Jewish population would be increasingly politically – and potentially physically – vulnerable.

It is unrealistic and unacceptable to expect the State of Israel to voluntarily subvert its own sovereign existence and nationalist identity and become a vulnerable minority within what was once its own territory.

But this is literally what they do to western countries. Bring in refugees/immigrants with high birthrates, call out and stand against any nationalist identity movements and praise how whites are becoming minorities in their own countries.