Canada’s State Broadcaster CBC; How to Lie With Statistics to Push the Coronavirus Vaccine – Vaccinated and Unvaccinated have SAME risk of heart problems from COVID

“I’m not holding any facts back, there is a risk,” said Dr. Kieran Moore, Ontario’s chief medical officer of health.

In comparison, the risk of myocarditis and pericarditis for people who received the Pfizer-BioNTech vaccine was one in 28,000.

Only two in every 100,000 people experience the side effect, Moore said. And they typically recover quickly with “simple over-the-counter medications like ibuprofen,” he said. There have been no hospitalizations and no fatalities.

Meanwhile, Moore said 11 in every 100,000 people contract “moderate to severe” COVID-19 and “often end up needing hospitalization.” He said that between 10 and 20 per cent of those people requiring hospitalization have heart inflammation.

How to lie with statistics:

The general public has exactly the same chance to get heart problems vaccinated or unvaccinated, WHILE YOUNG PEOPLE HAVE A 10x higher chance with Moderna and yet the article somehow has a positive spin… for vaccines.

Anti-White State Broadcaster CBC Angry That There are Too Many White People Running in Majority White Country and Province P.E.I.

The majority of candidates running on P.E.I. this federal election are once again white men.

All of the people who’ve so far thrown their hat in the ring are white, and only three — Margaret Andrade in Charlottetown, Anna Keenan in Malpeque and Lynne Thiele in Cardigan —are women.

“It was a little disappointing to see the lack of women candidates but as disappointing as that was, I don’t think it was really surprising in itself,” said Sweta Daboo, executive director of the P.E.I. Coalition for Women in Government.

Daboo said the uncertainty surrounding when the election was called may have played a big role in the candidate pool’s lack of diversity.

“This is a process that takes time and time is something that you … don’t have when it comes to a snap election,” she said.

“The changes that need to happen need to happen within the parties themselves in terms of diversifying their recruitment effort and starting early,” she said.

“I think what also makes a big difference is who’s doing recruiting and who’s choosing the candidates. If you have a diverse recruiting committee, then you’re going to have diverse candidates.”

Anti White CBC features Ben Philippe, a fragile black man with an inferiority complex who writes about blowing up and gassing white people during a ‘race war’ 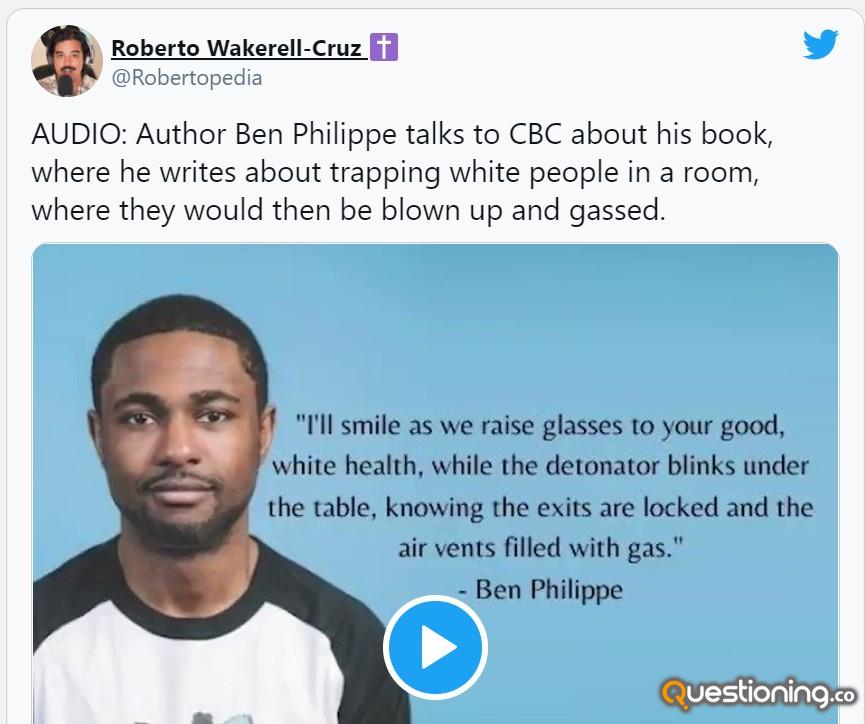 The CBC invited an author who wrote about “detonating” white people, while “the exits are locked and the air vents [are] filled with gas” to be interviewed on their flagship arts program.

Ben Philippe, a fragile black man with an inferiority complex appeared on Q where he discussed his newest book and racial issues in North America, talked about documenting the experience of being the token Black friend in his new collection of essays, Sure, I’ll Be Your Black Friend: Notes from the Other Side of the Fist Bump.

During this program, an excerpt from his book was read where he considered what his actions would be in a race war.
“When this race war hits its crescendo. I’ll gather you all into a beautifully decorated room under the pretense of unity. I’ll give a speech to civility and all the good times we share; I’ll smile as we raise glasses to your good, white health, while the detonator blinks under the table, knowing the exits are locked and the air vents filled with gas.”
After the host read this passage aloud, she responded by saying: “I mean that’s… I’m a Jewish person, and my grandparents survived the holocaust. I can’t tell you how it felt to read that sentiment, and I wanted to say to you that I’m so sorry that your experience of the world made you feel that way.” 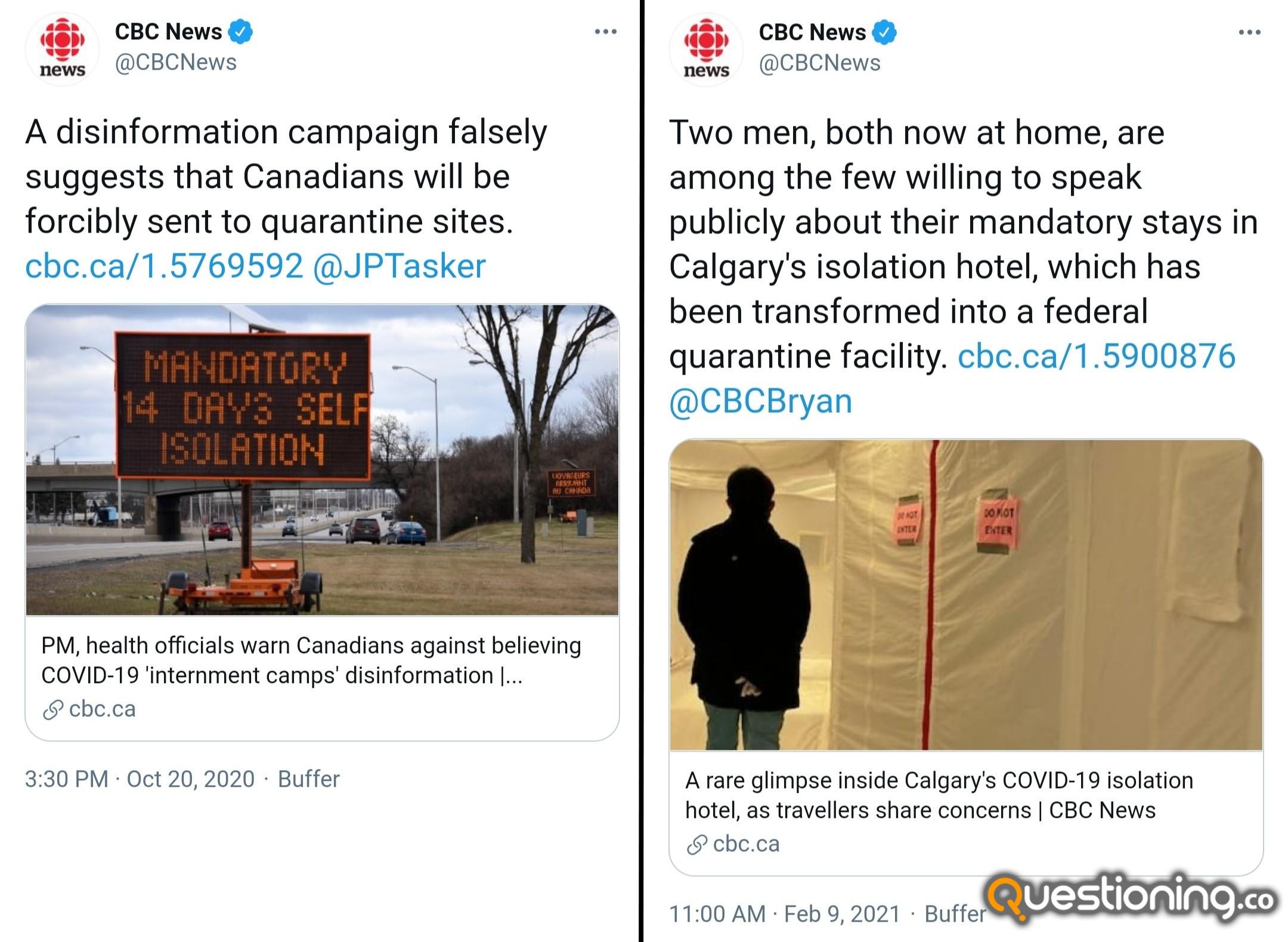 CBC’s insane anti white race baiting: Black persons car is broken into, she doesn’t file a police report, but begins blaming “white settlers” and “white supremacy” – this deserves an article in the CBC – “We know what happens when white settlers feel threatened,” She said the actions described in the tweets align with the ways white supremacist groups try to scare and silence BIPOC people

A local academic is speaking out after her car was broken into, which she believes may have been an act of intimidation intended to discourage her advocacy work.

“We know what happens when white settlers feel threatened,” she said.

After posting about the experience on social media, Wilson said other vocal BIPOC (Black, Indigenous and people of colour) leaders have shared similar experiences with her — and say the incidents have left them worried about their safety.

Wilson said she did not report the incident to police. She did say that racialized communities do not always feel safe reporting incidents to police.

Frankie Condon teaches race and class at the University of Waterloo, and has closely followed Wilson’s thread on social media.

She said the actions described in the tweets align with the ways white supremacist groups try to scare and silence BIPOC people. There has been a long history of white supremacy and extremism in Kitchener-Waterloo, Condon said.

“Systemic racism” is when your car is broken into, you have a national publicly funded “newspaper” write a sob story about you and how racist white people are to blame (without showing any proof whatsoever).

But thousands of white people being victimized by blacks is just part and parcel of living in a multicultural society.  And don’t you dare lump all blacks or muslims into one group and blame then for the actions of a random boogeyman that doesn’t even exist.

Data show Harris netted 500% as many headlines from CBC mentioning her name than Lewis did since the Conservative leadership race commenced on January 13, 2020, with some going so far as to laud Harris’ for “making history” as a woman of colour.

As of August 17, CBC had published 45 different headlines referencing Harris, while only nine for Lewis.

To achieve this count, True North tallied search results from CBC’s website. The final results include all English language media content published by the national broadcaster, including from CBC News, CBC Radio and other affiliates.

Lewis and Harris have both made history as the first black females to run for their respective positions.

CBC promotes the sexualization and gender bending of kids

What's it like to be a KID #DRAGQUEEN? 👠💄🌈 @CBCKidsNews spoke with the four stars of CBC's new #DragKids documentary to find out what #drag is, and why they do it. #lgbtq #queer #kiddragqueen @cbcdocs pic.twitter.com/Mip5pZMOjE

I would like to give an update on the developments surrounding CBC’s slanderous coverage of The Epoch Times’ special edition on Beijing’s coverup of the virus outbreak which led to a global pandemic.

I would also like to set the record straight that The Epoch Times special edition is in no way “advancing conspiracy” theories or claiming that the virus is “manufactured” as a bioweapon by China as alleged by CBC’s article, as I will make clear later in this statement.

Since the initial publication of its article on April 29, CBC has quietly made substantial changes to its headline three times—all without informing readers of the change or issuing a correction.

CBC’s Rosemary Barton interrupting Pierre Poilievre, to shield Trudeau (Freeland) from answering a direct question re: military intelligence about the coronavirus in January

Freeland then runs interference and never answers the question:

END_OF_DOCUMENT_TOKEN_TO_BE_REPLACED

CBC: “Closing Down University Campuses Because of COVID-19 is Racist”

Another petition from a University of Waterloo student called on the Ontario government to shut down all campuses “to prevent further spread of the virus.” As of Tuesday afternoon it had nearly 30,000 signatures.

Kerry Bowman, a bioethicist at the University of Toronto who was a frontline healthcare worker during the SARS outbreak in 2002-3, said the petitions were “a strong overreaction, and there’s clearly elements of racism to it.”

Why White Parents Need To Talk To Their Kids About Racism

I’m white and Jewish and grew up in a middle class liberal Canadian home in the ’70s, so I was raised with two contradictory messages about race and racism:

It teaches white kids that they don’t have to think or talk about race, and it contributes to a white, mainstream world that doesn’t care about or acknowledge the ways that black, Indigenous, and kids of colour experience prejudice (and pride).

In the Twitter world stalked relentlessly by journalists, there was a significant flap over the weekend when the esteemed CBC foreign correspondent, Neil Macdonald, now retired, posted that CBC jobs were wholly dependent upon keeping the Liberals happy.

The I-told-you-so crowd was elated, of course.

It began when Conservative Sen. Linda Frum posted a video on Twitter of the Commons’ emergency debate that showed CBC anchor, Rosie Barton, suddenly cutting away just as Conservative mucker-upper Pierre Poilievre was delivering a tough question to the PM about when he knew about COVID-19.

Barton responded to the ensuing vitriol with a rather non-offensive tweet, although she perhaps wrongly assumed the majority of her critics were card-carrying Conservatives finally having their suspicions confirmed.

“If you had been watching from the top, your leader had already asked the same question,” she tweeted in her defence. “We also thought perhaps the death of 31 people in one long-term care centre in Quebec might be important to get to. But do go on.”