There are many lessons to draw from the blood-soaked life of Lenin. But one of the most important is this takeaway for the terrifying “woke” moment America is living through right now. Things are not going to naturally get better. Things will not organically “calm down.” Until there is a fundamental reset of America’s treasonous leadership class, today’s unthinkable witch hunt is merely a prelude of an even darker globalist terror to come.

Once they had taken power, the Bolsheviks didn’t immediately launch Stalin-style mass purges. Instead, the Bolsheviks started off in a way modern Americans would find disturbingly familiar: By legitimizing criminal anarchy and co-opting the justice system.

As the socioeconomic crisis deepened, and the popular belief developed that the burzhoois were responsible for it, so these mob trials began to assume an overtly class nature. They became a weapon in the war against privilege, focusing less on petty thieves from the urban poor and much more on merchants and shopkeepers, factory owners and employers, army officers, former tsarist officials and other figures of superordinate authority.

[R]obbers — and sometimes even murderers — of the rich were often given only a very light sentence, or even acquitted altogether, if they pleaded poverty as the cause of their crime. The looting of the looters had been legalized and, in the process, law as such abolished: there was only lawlessness.

Lenin had always been insistent that the legal system should be used as a weapon of mass terror against the bourgeoisie.

The Reds were initially radicalized by the sense of being under threat. But once their full depravity was unleashed, it crucially did not start to moderate simply because they were winning. At the end of the Russian Civil War, thousands of soldiers and officers in the White Army surrendered after receiving a promise of amnesty. Once they were rounded up, all of them were shot. The next three decades of the Soviet regime brought one round after another of purges, famines, de-kulakization, and terror.

In 2017, people lost their jobs for attending the Charlottesville march. It didn’t matter if they engaged in any violence or broke any laws. Merely being there was enough.

“It was some racist march anyway,” thought most conservatives. “They should have known better than to go.”

But of course, it didn’t stop there. Throughout the Trump administration, it became acceptable to target people for pettier and pettier offenses: Anonymous posts online, leaked emails, decade-old articles (or decade-old tweets), attending conferences with the wrong people.

April 2021 has brought us to a new low. In Minnesota, Derek Chauvin is going to prison, likely for decades, for using a routine policing method to subdue a man twice his size who was resisting arrest. In Virginia, a police officer’s twenty-year career has ended in termination after he sent a $25 anonymous donation to the defense fund of Kyle Rittenhouse.

The left will not be placated by handing it victories. They are on a crusade, and as long as they are not stopped they will only become more extreme, more vengeful, and more dangerous.

Lewontin’s Fallacy Explained and Debunked: “More genetic variation within races than between them”

Lewontin is a pretty famous scientist. He’s won lots of awards, held influential positions in academia, and so on. He studied at Columbia University, which was home to the Frankfurt School and the father of race denialism himself, Franz Boas. Columbia was the original Western Marxist indoctrination center in America and was responsible for educating many influential globalists, including leading UN figures.

To claim that a “low” Fst rating invalidates humanity’s distinct subspecies would require us to declare countless other subspecies as “biologically invalid.” But you’ll never hear Marxoid academics arguing in favor of that. Their only qualms are with human taxonomy because it obstructs the race-blind globalism that is central to their ideology.

Lewontin’s methodology was criticized by multiple scientists almost immediately after his paper was published. His Fst analysis used 17 individual genetic markers. However, to paint an accurate genetic picture of human races (or any organism in existence), multiple genetic markers must be used in unison. The more markers you use, the more accurate a picture you paint. Additionally, the more markers you use, the less likely you are to genetically misidentify races. Once enough markers are used, the probability of genetically misidentifying an individual drops to below 1% — almost zero.

*Note: contrast this to the welfare state, destruction of family unit, fatherless homes, leading to rampant crime in the black community nowadays – all stemming from the same root cause.

When the Bolsheviki came into power in 1917 they regarded the family, like every other ‘bourgeois’ institution, with fierce hatred, and set out with a will to destroy it. ‘To clear the family out of the accumulated dust of the ages we had to give it a good shakeup, and we did,’ declared Madame Smidovich, a leading Communist and active participant in the recent discussion.

At the same time a law was passed which made divorce a matter of a few minutes, to be obtained at the request of either partner in a marriage. Chaos was the result. Men took to changing wives with the same zest which they displayed in the consumption of the recently restored forty-per-cent vodka.

‘Some men have twenty wives, living a week with one, a month with another,’ asserted an indignant woman delegate during the sessions of the Tzik. ‘They have children with all of them, and these children are thrown on the street for lack of support! (There are three hundred thousand bezprizorni or shelterless children in Russia to-day, who are literally turned out on the streets. They are one of the greatest social dangers of the present time, because they are developing into professional criminals. More than half of them are drug addicts and sex perverts. It is claimed by many Communists that the break-up of the family is responsible for a large percentage of these children.)

The peasant villages have perhaps suffered most from this revolution in sex relations. An epidemic of marriages and divorces broke out in the country districts. Peasants with a respectable married life of forty years and more behind them suddenly decided to leave their wives and remarry. Peasant boys looked upon marriage as an exciting game and changed wives with the change of seasons. It was not an unusual occurrence for a boy of twenty to have had three or four wives, or for a girl of the same age to have had three or four abortions.

An insider at Publicis Groupe, one of the world’s biggest advertising and PR companies, exclusively shared screenshots from a “diversity” training day in which employees received instructions by proponents of radical politics of race, which included the corporate wokeness indoctrination such as the idea that the slogan “Make America Great Again” is a form of “covert white supremacy.”

employees are taught that not to consider people’s skin color in their day-to-day interactions is a form of “white privilege” or even “white supremacy.”

In other messages, employees discussed cutting off clients that don’t meet the demands of far-left politics.

Another presentation instructs employees to read the works of left-wing race radicals, including Robin DiAngelo’s White Fragility — which is fast becoming a staple of corporate “diversity” reading lists — and the New York Times‘ 1619 project, which has been widely criticized by historians and helped inspire the vandalizing of a George Washington statue in Portland, Oregon.

Another slide educates employees on “social dominance theory” and the “oppression matrix,” which ranks you based on the color of your skin, your gender, class, sexual orientation, religion, and other categories. Whites, males, and “gender conforming men and women”  are among the groups described as “privileged.”

Seattle’s hard-left city council is trying to their abolish Police department & replace it with a university-style group of activists trained in “trauma-informed, gender-affirming, anti-racist praxis.”

Seattle City Council moves to abolish the entire Seattle Police Department and replace it with a “civilian led Department of Community Safety & Violence Prevention.” They want to replace the police force with nonprofit programs and “community-led activities.” 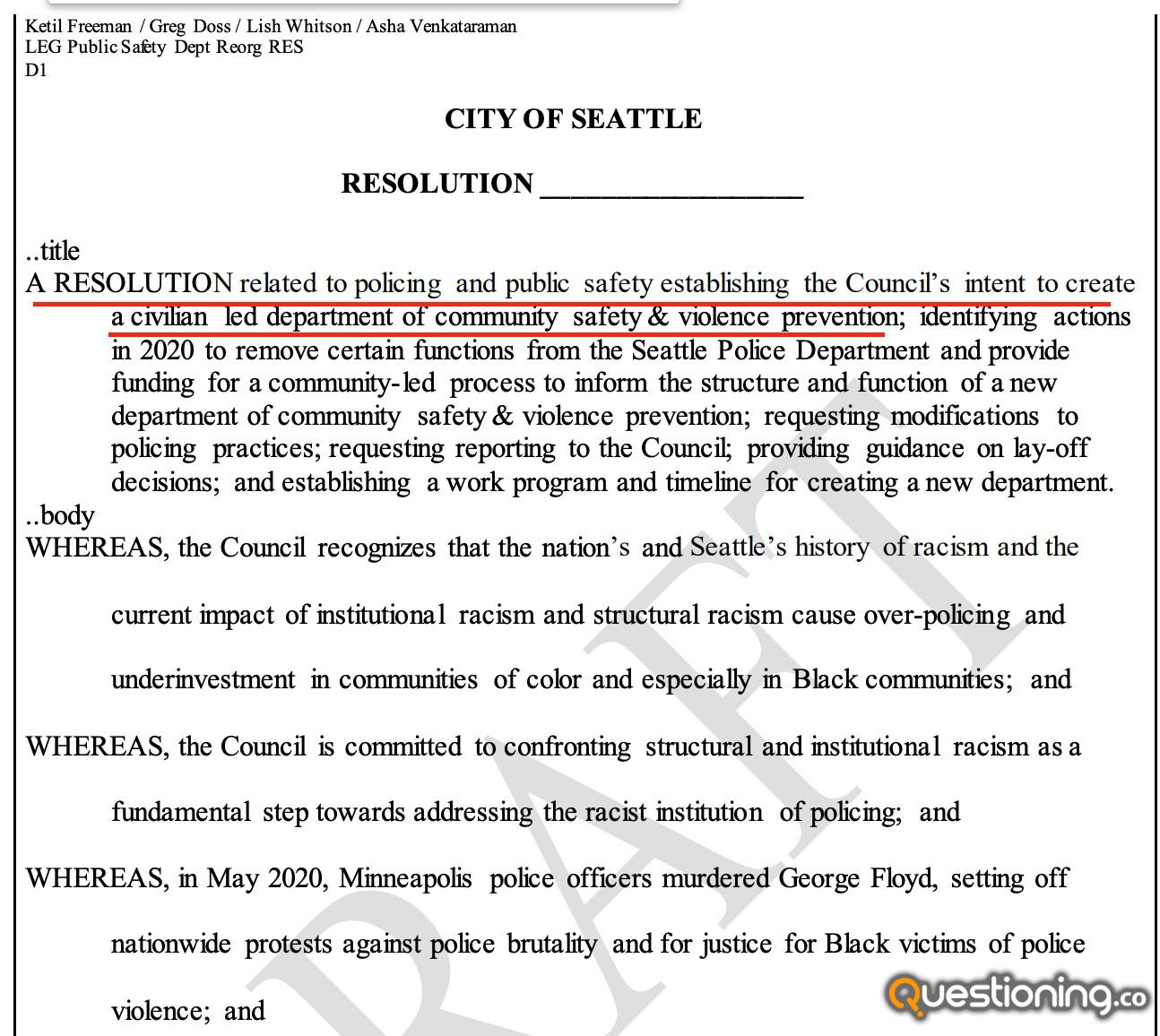 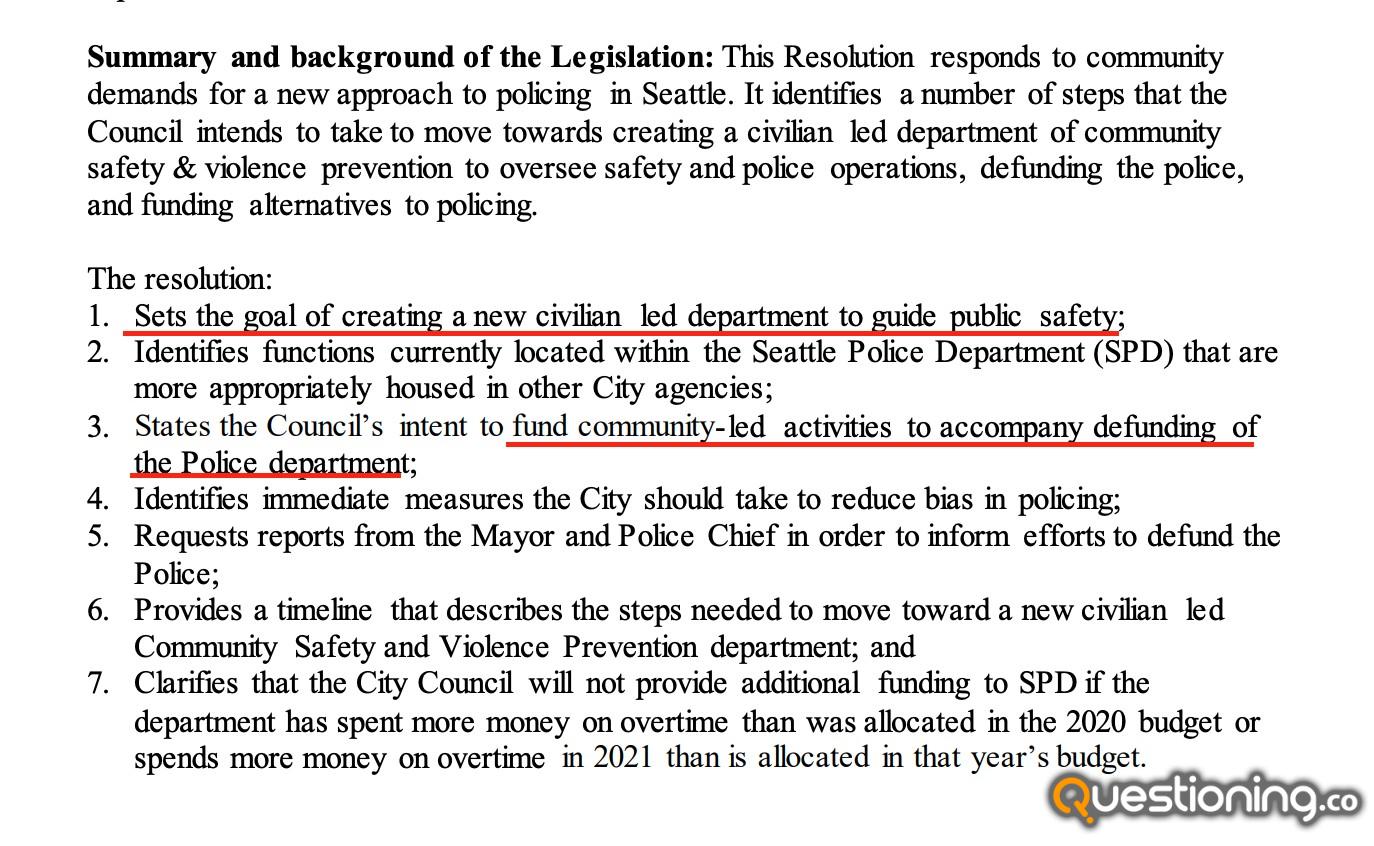 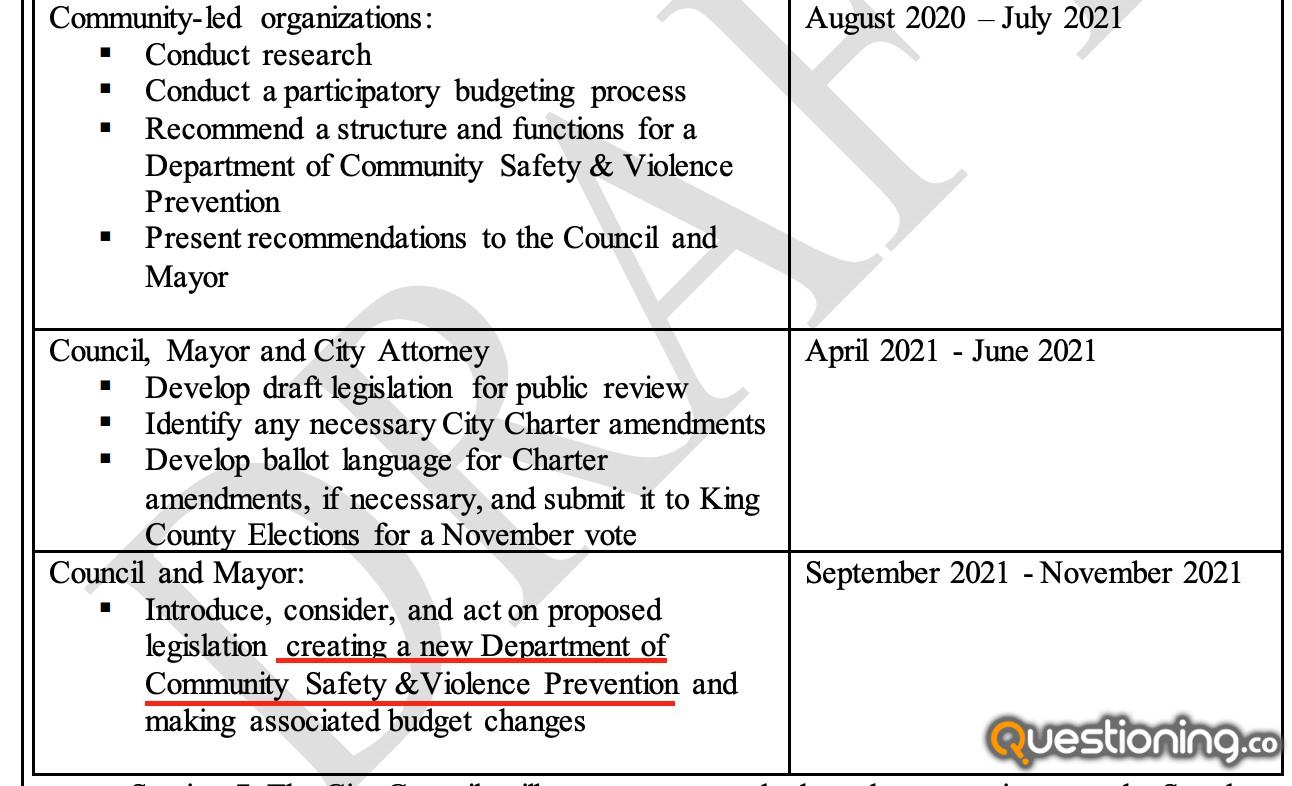 In the proposed legislation, the council argues that the Seattle Police Department “[perpetuates] racism and violence” and upholds “white supremacy culture.” 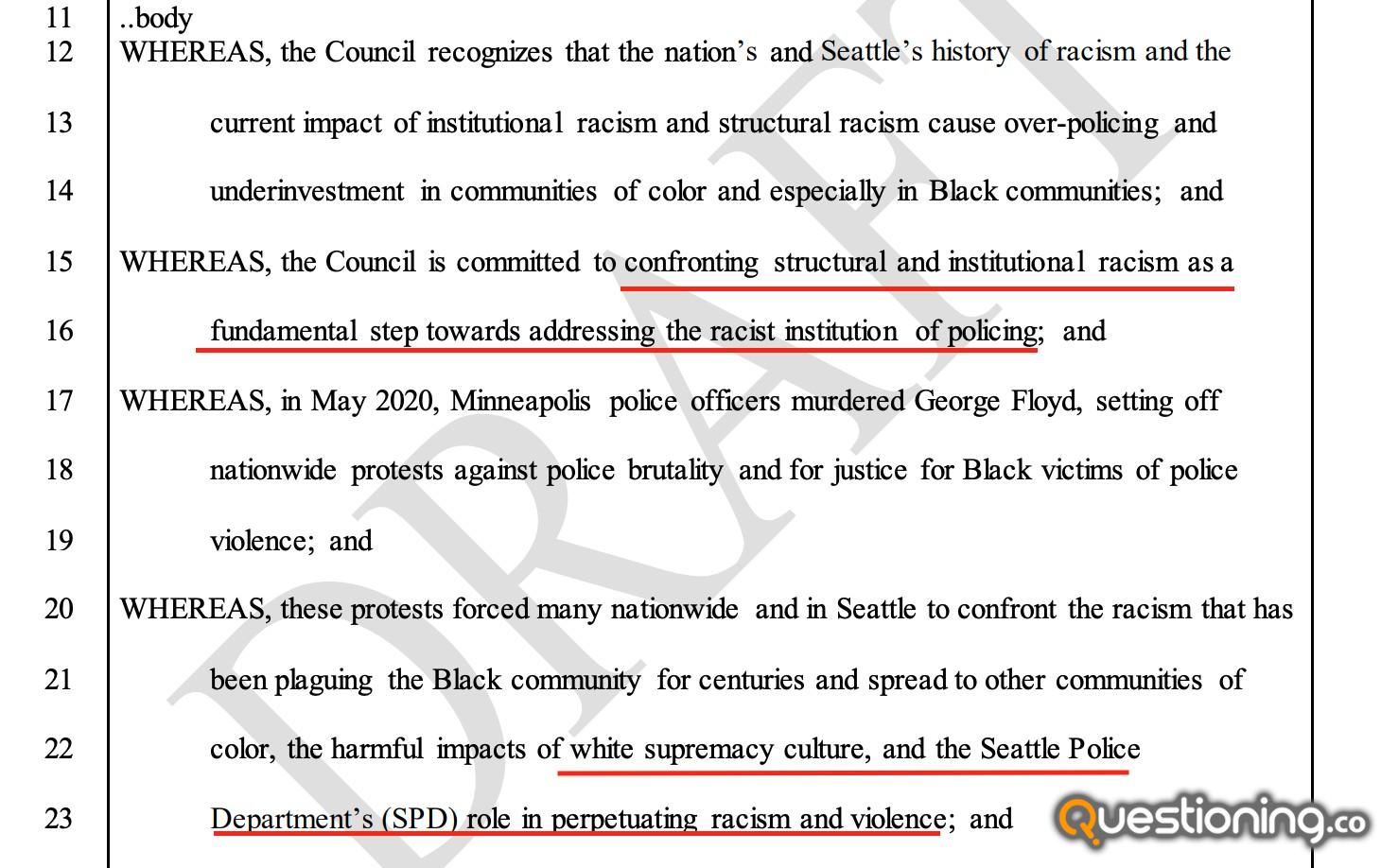 And finally, the plan demands that the City conduct an “immediate transfer of underutilized public land for BIPOC community ownership”—in essence, the redistribution of land, which is a hallmark of Marxist regimes.