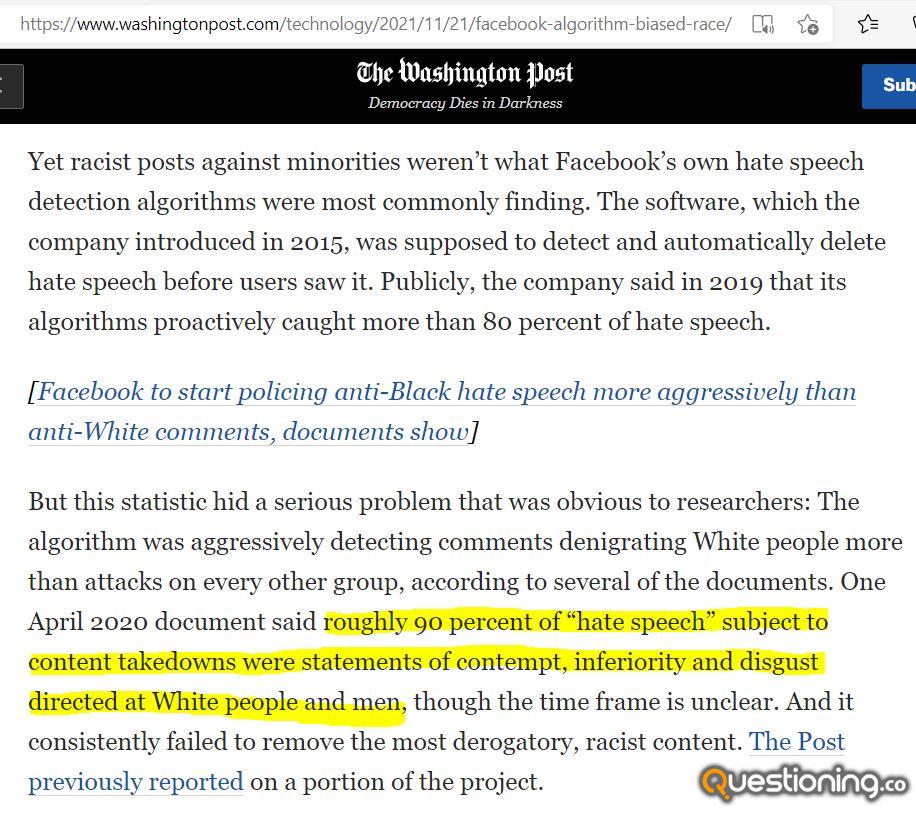 Yet racist posts against minorities weren’t what Facebook’s own hate speech detection algorithms were most commonly finding. The software, which the company introduced in 2015, was supposed to detect and automatically delete hate speech before users saw it. Publicly, the company said in 2019 that its algorithms proactively caught more than 80 percent of hate speech.

But this statistic hid a serious problem that was obvious to researchers: The algorithm was aggressively detecting comments denigrating White people more than attacks on every other group, according to several of the documents. One April 2020 document said roughly 90 percent of “hate speech” subject to content takedowns were statements of contempt, inferiority and disgust directed at White people and men, though the time frame is unclear. And it consistently failed to remove the most derogatory, racist content.

And yet they are only concerned about minorities;

“This information confirms what many of us already knew: that Facebook is an active and willing participant in the dissemination of hate speech and misinformation,” Omar said in a statement. “For years, we have raised concerns to Facebook about routine anti-Muslim, anti-Black, and anti-immigrant content on Facebook, much of it based on outright falsehoods. It is clear that they only care about profit, and will sacrifice our democracy to maximize it.”

From now on, the algorithm would be narrowly tailored to automatically remove hate speech against only five groups of people — those who are Black, Jewish, LGBTQ, Muslim or of multiple races — that users rated as most severe and harmful. (The researchers hoped to eventually expand the algorithm’s detection capabilities to protect other vulnerable groups, after the algorithm had been retrained and was on track.) Direct threats of violence against all groups would still be deleted.

Kaplan and the other executives did give the green light to a version of the project that would remove the least harmful speech, according to Facebook’s own study: programming the algorithms to stop automatically taking down content directed at White people, Americans and men. The Post previously reported on this change when it was announced internally later in 2020.

What this means is that non-whites systemically hate whites judging by the amount of hate white people receive on the platform. And Facebook will not only encourage this by not deleting anti-white hate speech, but will only police anti-minority hate speech.