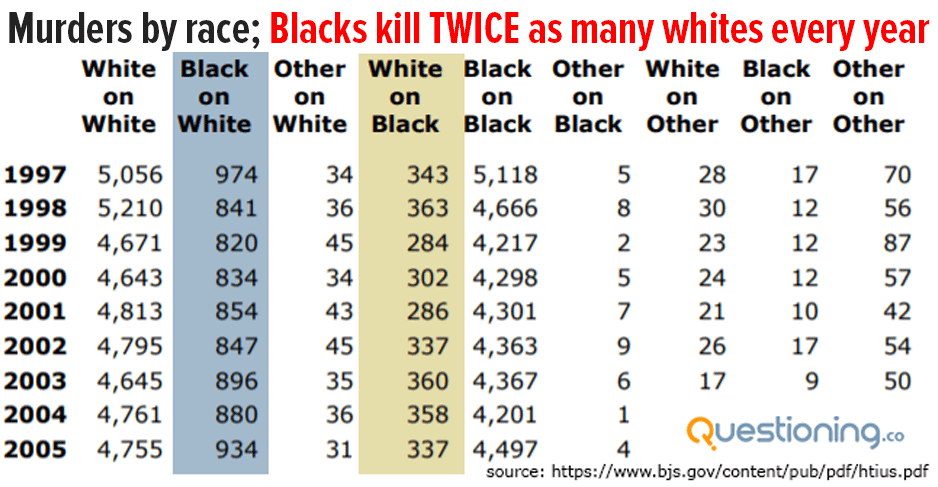 In every year that statistics exist, blacks have killed at least TWICE as many whites as the other way around. This is while black males make up less than 6% of the US population. Blacks are 12 times more likely to rob whites than vice versa. Half of all carjackings perpetrators are black. Blacks even disproportionately commit hate crimes.

It’s worth noting that this same pattern in evidence in how we are taught history. Roughly 3,500 blacks were lynched in the United States between 1882 and 1968. That’s a rate of 40 per year. Obviously, 40 lynchings per year is 40 too many. But a rate of 40 lynchings per year suggests that for each black person lynched something like 10 – 25 whites were murdered by black citizens, and it is not at all obvious why a black person being lynched is worse than 10 – 25 white people being murdered. Yet that is the value judgement implicit in how we are taught to think about American history.

Former presidential candidate Beto O’Rourke said that racism in America is “foundational” and that people of color were under “mortal threat” from the “white supremacist in the White House.” Pete Buttigieg chimed in to explain that “systemic racism” will “be with us” no matter who is in the White House. Sen. Cory Booker called for “attacking systemic racism” in the “racially biased” criminal justice system.

The systematic ignoring of white victims has given people a false impression about who is and who is not killed both by police and by their fellow citizens both in the present and in the past.

Knowing all these facts, visit the Race Baiting category to see how media and politicians incite race based violence and hatred by spreading lies.

21-12-29: Black brutally murders white Sgt. Marlene Rittmanic, 49 as she begs for her life

21-12-22: Black murders white Father Andrew Hintt and his two children in their home

21-12-03: UK: Black butchers his white friend Paulius Petrasiunas to death moments after laughing, shopping with him.

21-12-02: Blacks knock unconscious an elderly white man with a brick then rob him

21-11-21: Black terrorist Darrell Brooks attacks Christmas Parade in Waukesha, runs over dozens of people. 5 White people killed, 40 others injured.  See the biased coverage of this incident by MSM who downplay the story, call this a simple ‘crash’.

21-11-02: Black kidnapped white Lyft driver, Brandy Littrell, 36, forced her to crawl through forest, then shot her 7 times leaving her for dead

21-06-11: Black murders white Alexander Presley in front of his pregnant wife and kids as he came to buy an ATV

21-06-08: Black randomly targets white 14 year old girl and stabs and murders her over the span of 20 minutes

21-05-27: Black randomly murders elderly white Martin Stevens by unloading his entire gun on him – jury found him not guilty

21-05-21: White man stops to help broken down car on side of road, even takes the black couple to junkyards to get spare tire – they repay his kindness by beating him nearly to death

21-05-18: Black robs white hotel manager, she complies by giving him all the money, he murders her anyway

21-04-08: Blacks attack white usps worker ‘to get that stimulus check’

21-04-01: Black uses a rock to beat to death his white girlfriend / mother of his child

21-03-27: Black criminal who was awaiting trial for first degree assault and a burglary charge (with a firearm) kills white grandmother of 5 while street racing

21-03-01: Black rapper DaBaby violently beats up 63 year old white man from whom he rented a home from to film rap video

21-02-08: Black woman screamed racial abuse at white woman then pushed her under a bus (she wasn’t hurt)

20-09-21: Black burst into a Struthers, Ohio, home early Monday and opened fire on whites living there, killing four-year-old Rowan Sweeney Two men and two women, all in their 20s, were struck by gunfire ; one of the male victims was shot twice in the head and is in critical condition

20-09-13: Black rear ends white couple on their way to church, they think it’s a fender bender, get out. He carjacks them, executes white man Jordan Stevens in front of pregnant wife

20-09-11: Black arrested for murder of white Dedrea Duncan earlier in the summer

20-09-06: Black has altercation in restaurant with white 17-year-old Dominic Williams-Wood in High Ridge, follows him home and shoots him dead

BLACK PRIVILEGE: Black Prosecutors in DC Call for Criminal Justice System to be “More Fair” Because Too Many Black People Are Prosecuted for Gun Crimes in Our Nation’s Capital 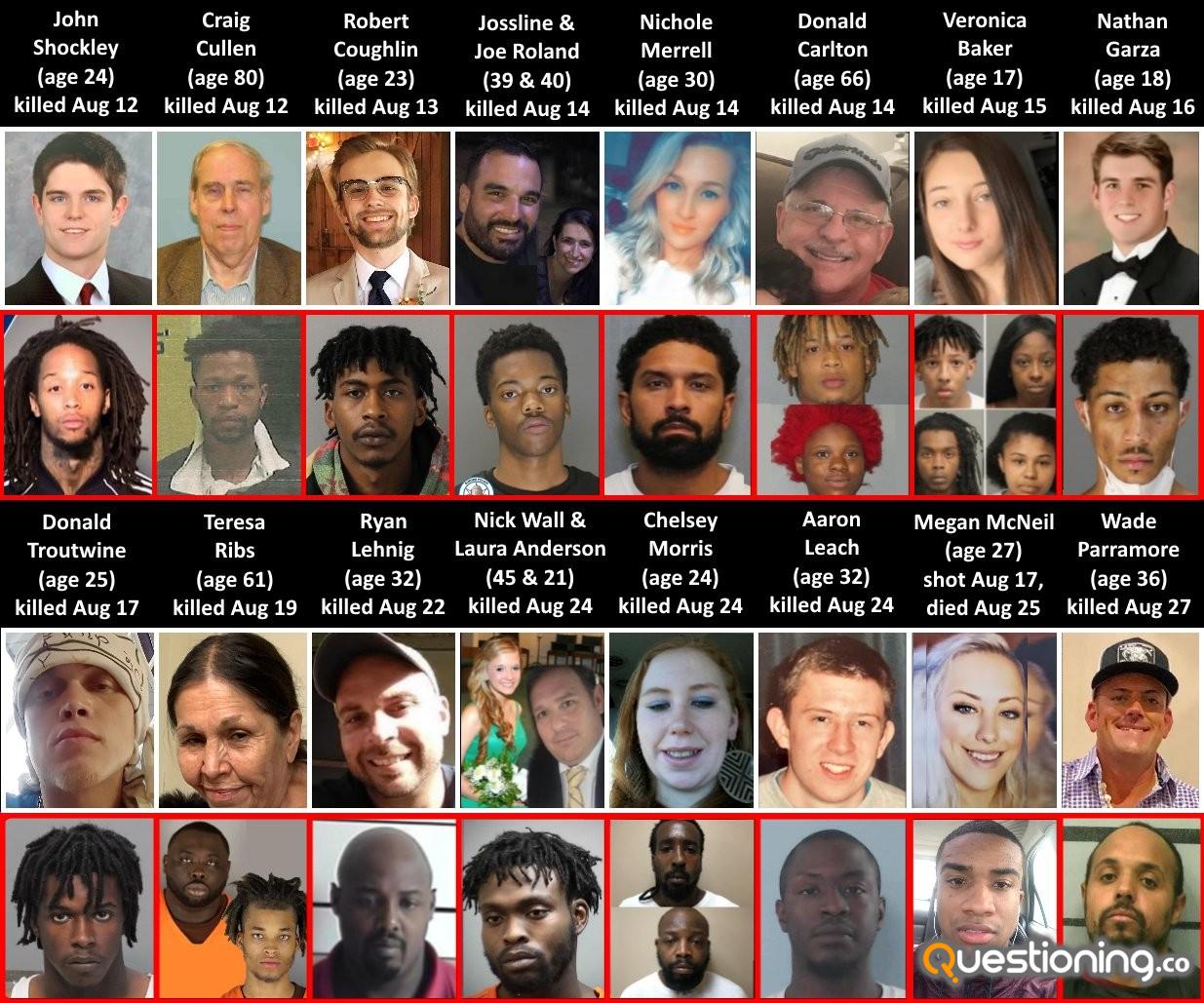 20-08-14: Black robs and kills white Jossline and Joseph Roland (parents of FIVE children) who were going to buy a used car from him

20-08-14: Canada: Black shoots white 45-year-old John Wheeler in the back with a shotgun as he’s waiting for a ride to work

20-08-10: Black walks up to white 5 year old child Cannon Hinnant and executes him with a shot to the head.

How CNN covers white on black vs black on white crimes: 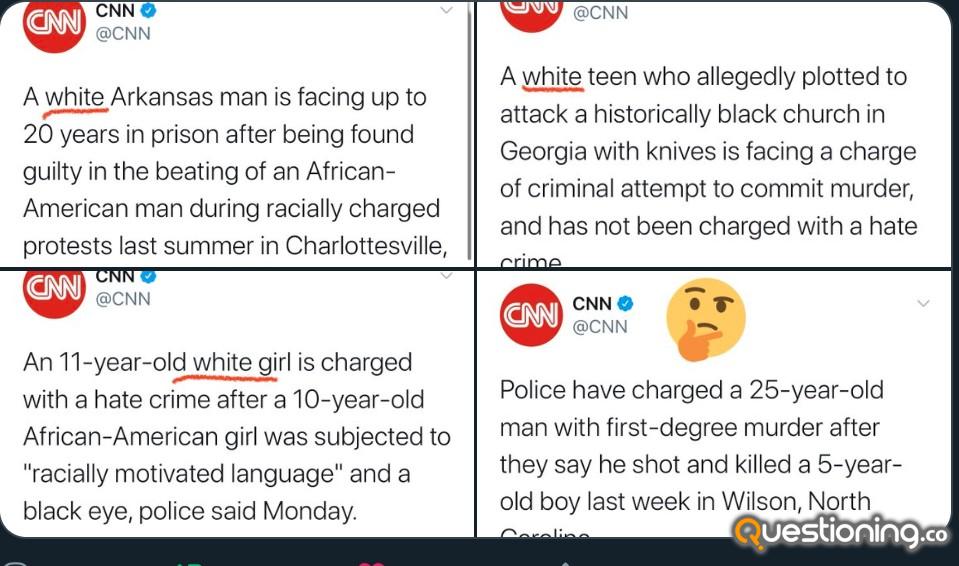 20-08-07: Black 16 year old home invasion of white couple, killed 82-year-old Roger Payne Jr. and shot 73-year-old Nancy Payne inside of their home. ‘This is not my son’: Louisa father reacts

20-08-01: Old white lady in Staples asks black woman to social distance and wear mask, is then thrown on the ground and breaks her leg.

20-07-21: Black adult kneels on white toddlers neck while another holds his hands behind his back. Child is crying.

20-06-27: Black man punches elderly white woman, 78, in the head in random attack in Brooklyn – and then acts like HE is the victim

20-06-15: Black randomly walks up behind white student Seth Smith and executes him with shot to the back of the head. Hate crime?

20-05-27: After all these black on white crimes, not a single riot. Do You Remember the MASS RIOTS AND LOOTING After Muslim Cop Mohamed Noor Shot Justine Damond Point Blank in the Chest in Minneapolis? No national outrage or riots. Compare to when a white police officer kills a black man George Floyd.

As blacks riot, some businesses post signs saying they are “black/minority owned”. Does this mean blacks are attacking businesses that are white owned? 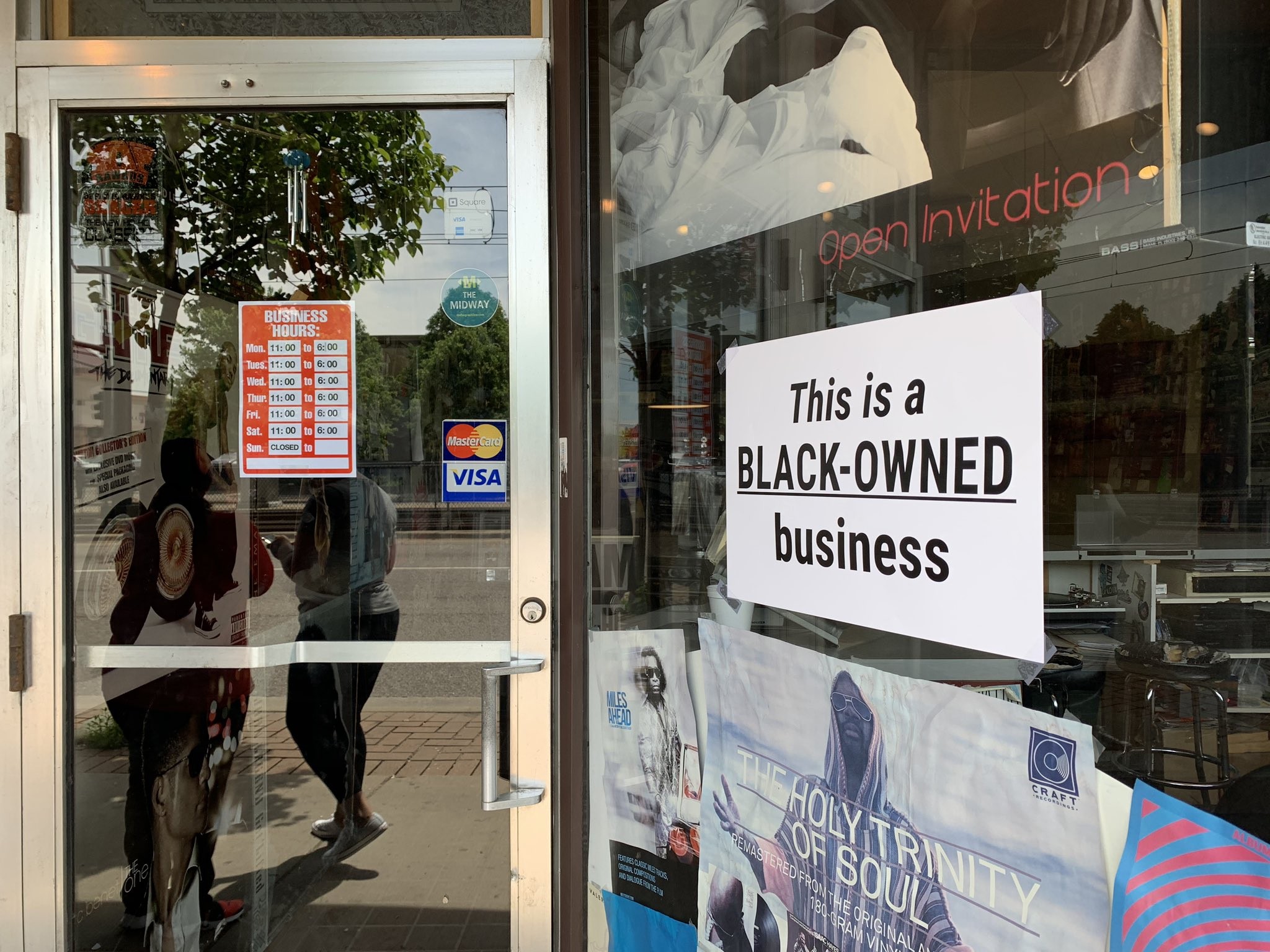 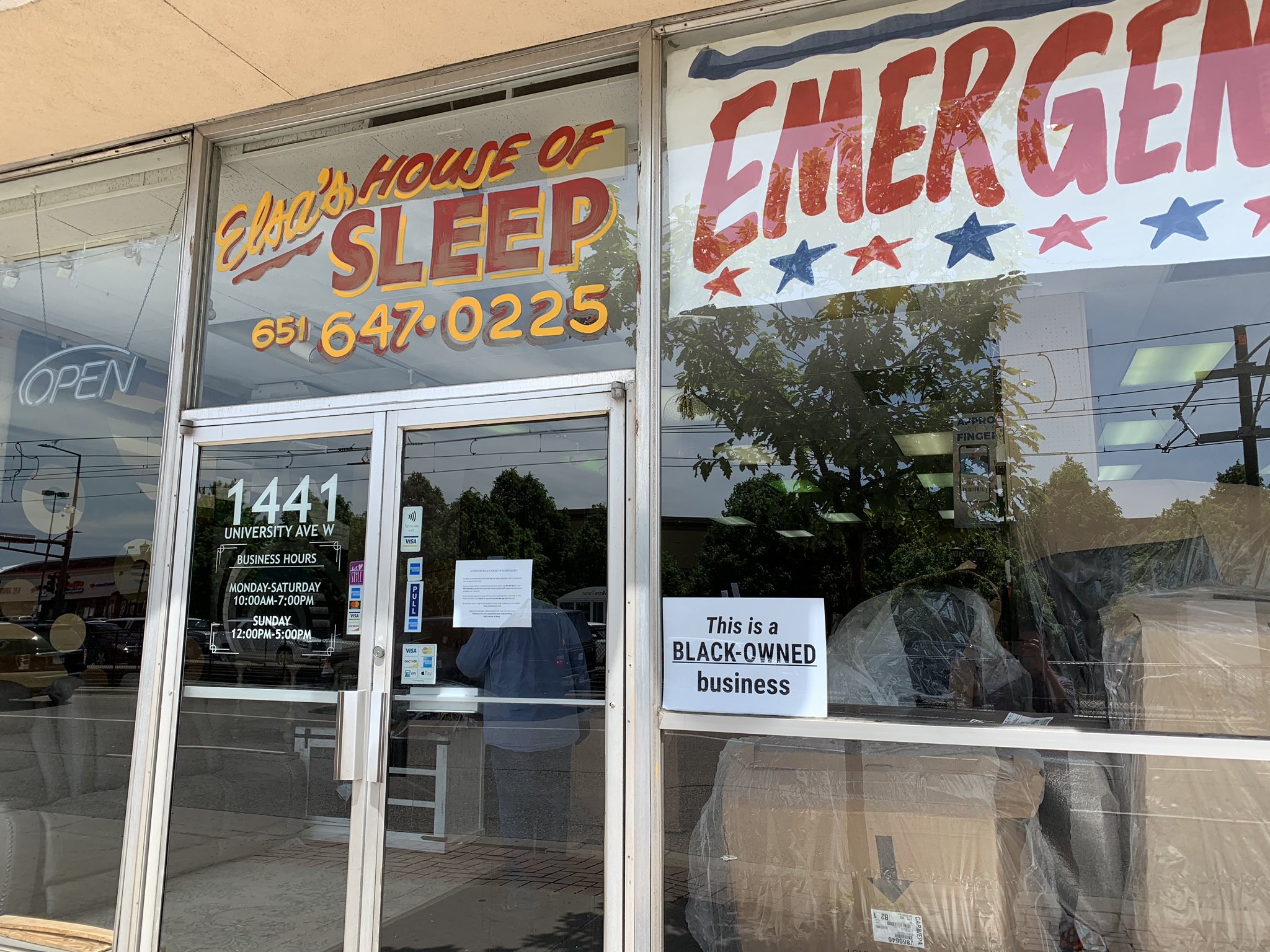 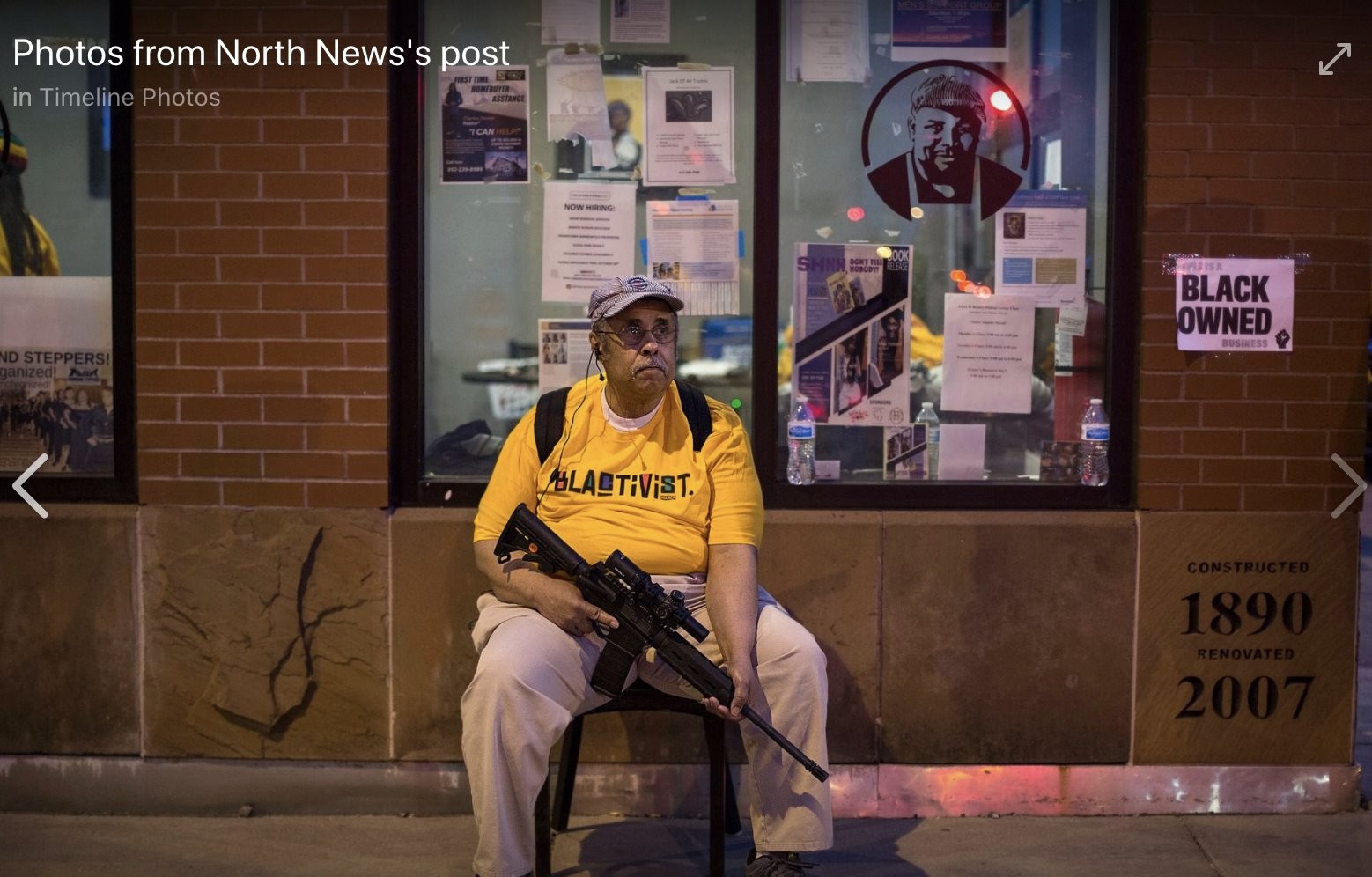 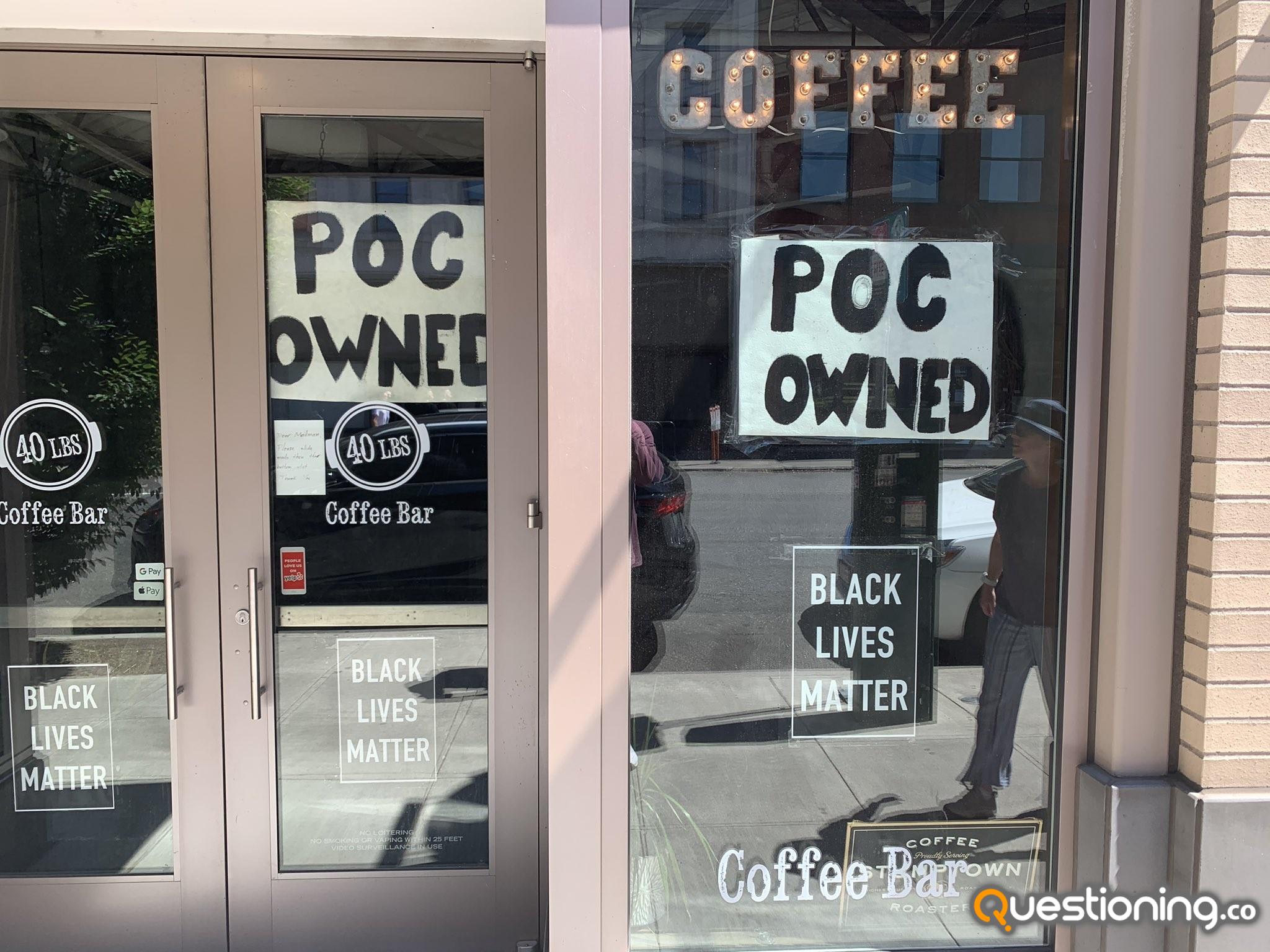 20-05-20: Black Jaydon Hayden beats up helpless old white people in nursing care homes. 75 year old victim died July 27.  Barely any coverage from leftist media. But a few days later a white woman with a dog said some mean things to a black man and called 911 on him, which was worldwide news. 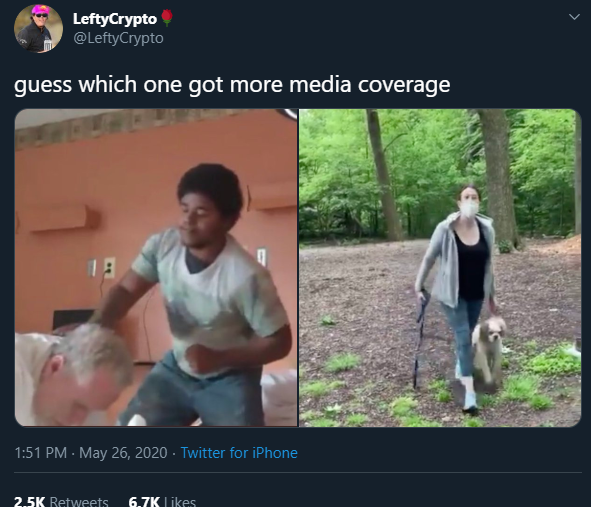 20-05-11: Cornelius Haney, 40, was released April 15 under powers granted to the Colorado Department of Corrections by Gov. Jared Polis. Police arrested Haney on Monday in the fatal shooting of 21-year-old Heather Perry (white) in an alley in east Denver on May 9

20-05-08: White Woman Befriended Mom’s Black Killer Out of ‘Spiritual Obligation’ — and then He Murdered Her too.

20-04-25: Black kills white 30-year-old Cody Marcus Myers — was allegedly stabbed at least half a dozen times by the defendant

May 2020 is when Ahmaud Arbery killing was in the national media spotlight. Notice how many black on white crimes happened that same month, and not a single got as much traction or outrage.

20-04-08: Black boyfriend of white girl shot both her white parents in the head in an apparent robbery and left them for dead in a ditch. The victims, Dr. Beth Potter, 52, and husband Robin Carre, 57. Potter was wearing pajamas and socks, while Carre was wearing only underwear, authorities said. Sanford and Larrue planned to rob the parents after learning from the daughter that the couple was wealthy

19-09-23: 2 black teens kill 59-year-old John Marvin Weed of Mount Airy because he wouldn’t give them a dollar. Video shows one of the suspects spitting on the victim after punching him.

2019: Multiple instances of groups of blacks brutally beating and robbing white people. No riots or international outrage happened after.

19-06-03: Hate Crime: black parolee arrested for raping and bashing a white woman on the roof of his Bronx apartment building allegedly told a witness that she “deserved” the brutal attack because of slavery.

17: Black police officer Mr. Noor, now an ex-officer and convicted murderer, was sentenced to about 12 and a half years in a Minnesota prison for the death of (white) Justine Ruszczyk, an unarmed woman he killed while on patrol. There were no riots, or worldwide outrage.

17-10-02: Black teen robs old white couple then rapes the woman. Goes to rob another white family and kills father of 2

17-09-26: Hate crime + terrorism. Black man shoots up white church. No outage. He cited white supremacist Dylann Roof’s massacre at a black church in Charleston, South Carolina, in 2015, also referenced the red, black and green Pan-African flag, sometimes called RBG.“The blood that 10 of your kind will shed is that of the color upon the RBG flag in terms of vengeance.”

16-07-07: Hate crime: Black man Micah Xavier Johnson stated that he wanted to kill white people, especially white police officers. He then killed five officers and injuring nine others. No riots happened after this.

16-08-05: An 83-year-old Dorothy Dow was brutally beaten and set on fire by 4 blacks who broke into her Meriwether County home overnight. Both her arms were broken, and her face was cut and bruised. Before they left, prosecutors said the crew poured lighter fluid down Dow’s back and set her on fire. She used water from a sleep apnea machine to put out the flames. Dow died more than 20 days later at Grady Memorial Hospital.

16-10-02: black 18-year-old man killed a 91-year-old Second World War veteran Paul Monchnik by beating him, then dousing him with gasoline and setting him on fire.

16-04-04: White Erik Tucker invites black for dinner party. Black murders him, then shoots one of the other guests in the face, calling her a “white bitch” as he destroyed her nose and 14 teeth.

2016: Karina Vetrano: the White Female Jogger Found Murdered and Sexually Assaulted in Queens in 2016 by a Black Male. No national outrage.

15-04-29: Black abducts white Ana Isabel Charle, rapes her at gunpoint, then shoots kills her as she tries to escape.

15-05-20: Black did a home invasion, possibly with help, took the unarmed white Savopoulos family hostage and forced them (by torturing the Savopouloses’ 10-year old son) to have $40,000 sent to their house [“$40K delivered to home, boy tortured before DC murders, fire,”]. Then he murdered them. The New York Times found just  two stories about this murder Fit To Print [Arrest Made in Washington Killings, May 21, 2015 and More Than One Attacker Is Suspected in Killings of 4 in Washington, May 22, 2015]. But it found 586 stories about Freddie Gray Fit To Print.

15: Black Leeroy Wilbert Rogers Sr., 58, of Massillon, who is charged with killing two White women in 2015 Had extensive criminal history, ties up boyfriend and sets car on fire, rapes girlfriend, shoots her, she lives.

13-07-26: Black man, friend of white Jeremy Crane murders him and his 7 year old niece Kyleigh Crane to steal an Xbox and PS3.

13-03: White girl Chelsea Schobert gets black boyfriend, family accepts him, helps him, buys him clothes. After she refuses sex one day, he beats and stabs her, she ends up in hospital. He and a friend then lure the parents out of the hospital as they are visiting the wounded daughter and beat and bludgeon them to death.

2010: Dec. 31 Mona Nelson, 44, allegedly tortured a white child to death with a blowtorch before dumping his little body in a ditch in northeast Houston on Christmas Eve, 2010. Do you remember hearing about this? I sure don’t.

07-12-25: Black murders white wife and her brother, then rapes her corpse for 2 days as he forces her second surviving brother to watch – only gets 20 years jail.