Double Standards during George Floyd, BLM, Antifa Riots – Media and politicians favorable coverage of the rioters while blaming white supremacists, Trump, alt-right, instead of the actual people rioting, looting and attacking cops and civilians. Then actors and politicians bail out arrested rioters.

As protesters march on Trump Tower in Chicago & the White House, a frank media might point out the death of Mr.Floyd happened under a democrat mayor, democrat senator, democrat governor, with a democrat county prosecutor.

BBC UK “Seriously” program tries to defend their violence and paint them in a good light:

6: How violent are they?

Their willingness to use violence marks out Antifa from many other left-wing activists, although the Antifa members we spoke to said they denounce the use of weapons and violent direct action. They said if violence does occur, it’s as a form of self-defence. They also make historical arguments to justify their position. For instance, they ask, what if opponents of the German Nazi Party had been more forceful in their opposition in the 1930s, could World War Two and the Holocaust have been averted?

Antifa have been directly and sometimes physically confronting the far right on the streets and, in some cases, they have been successful in postponing, cutting short or cancelling rallies and speeches up and down America.

ABC News Literally quotes a far left Antifa member to get his opinion on the topic:

“It’s not one specific organization with a headquarters and a president and a chain of command,” said Mark Bray, a history professor at Rutgers University and author of “The Anti-Fascist Handbook.” “It’s a kind of politics. In a sense, there are plenty of antifa groups, but antifa itself is not a group.”

While Attorney General William Barr in a statement Sunday denounced “violence instigated and carried out by antifa and other similar groups,” the Justice Department as of Wednesday has not made public direct evidence showing widespread involvement by avowed antifa supporters in instigating the violent scenes that have unfolded throughout the U.S.

So they fact check Trump, but not the Antifa supporting guy whose opinion they use to tell people how great Antifa is.

Other MSM jumping to defend Antifa:

However, antifa, a loose network of left-wing activists who sometimes violently confront fascists and white supremacists, is more of a movement than a well-oiled organization.

“Antifa operates as a designation similar to the way someone might describe themselves as a punk rocker,” Donovan says.

Still, Donovan says there’s been a lot of disinformation coming out about antifa in recent days, including from President Donald Trump and his attorney general, William Barr. Both assert the movement is behind the violence at rallies across the country, and Trump threatened to list antifa as a domestic terrorist organization.

NPR has reviewed court documents of 51 individuals facing federal charges in connection with the unrest. As of Tuesday morning, none is alleged to have links to the antifa movement. 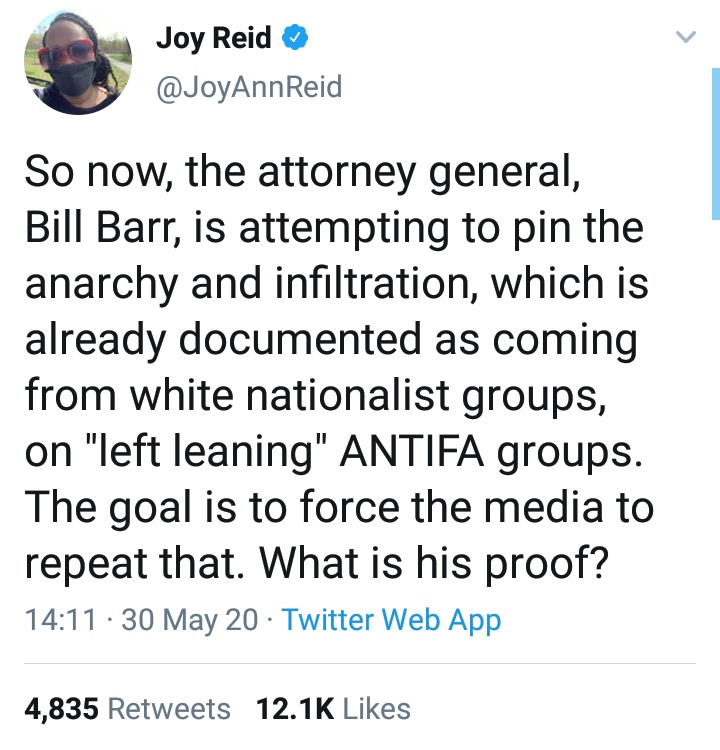 And where is the proof these are outside instigators and alt right groups? 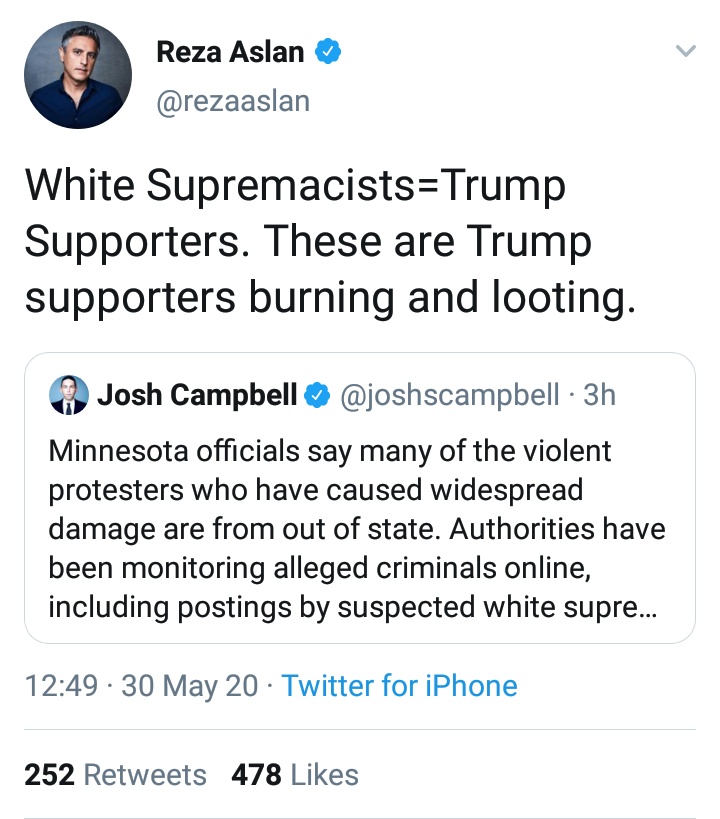 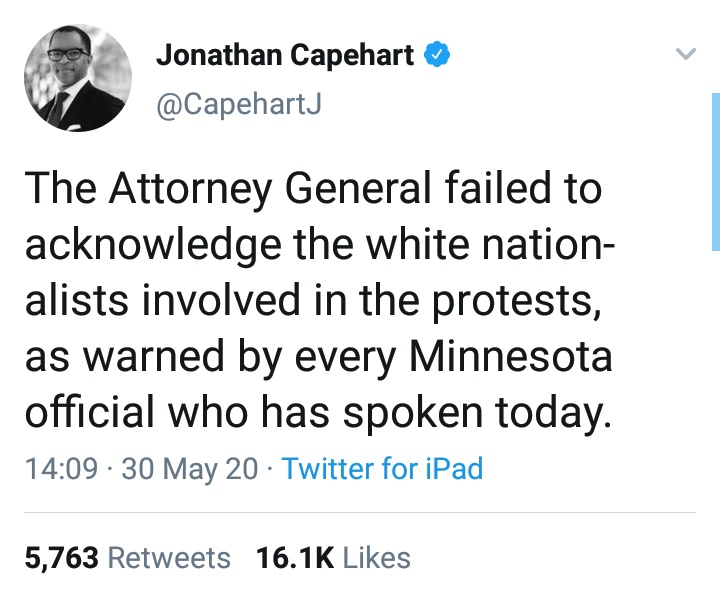 If white supremacists are rioting, why are famous people paying their bail? 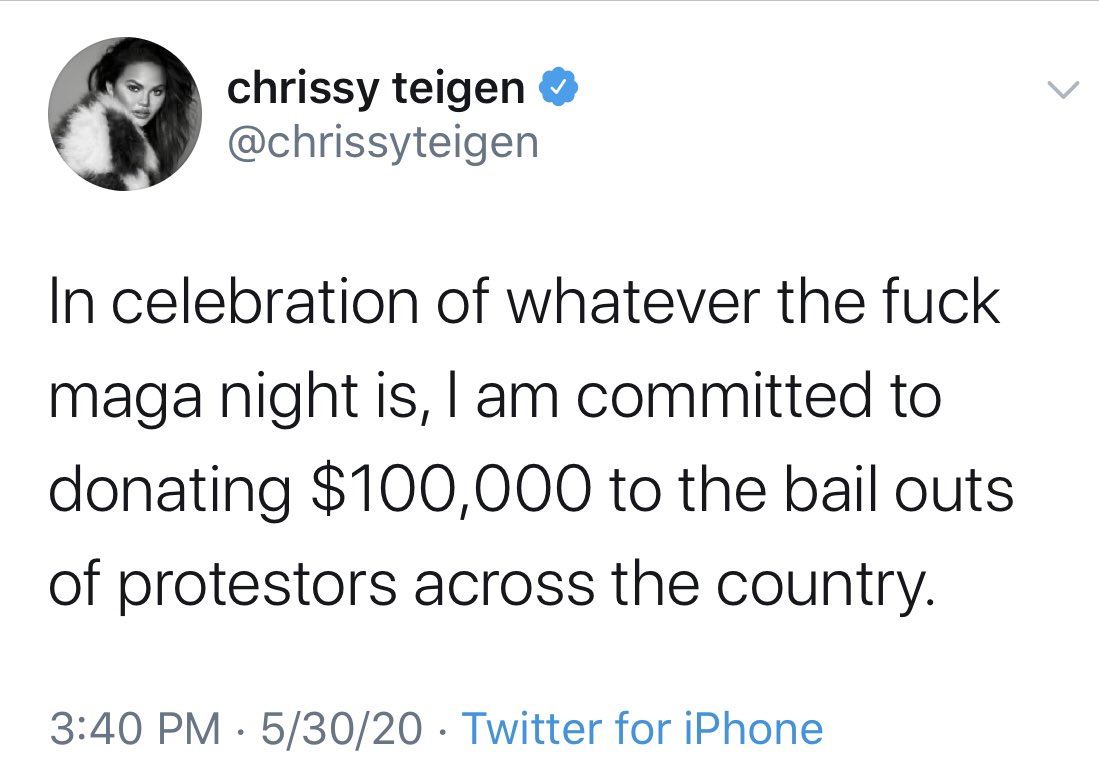 Among those bailed out by the Minnesota Freedom Fund (MFF) is a suspect who shot at police, a woman accused of killing a friend, and a twice convicted sex offender, according to court records reviewed by the FOX 9 Investigators.

According to attempted murder charges, Jaleel Stallings shot at members of a SWAT Team during the riots in May. Police recovered a modified pistol that looks like an AK-47. MFF paid $75,000 in cash to get Stallings out of jail.

Darnika Floyd is charged with second degree murder, for stabbing a friend to death. MFF paid $100,000 cash for her release.

Favorable news coverage of the rioters:

20-06-25: BBC fake news “Police injured during illegal street party” but don’t mention that it was a BLM protest with blacks rioting

20-07-06: BLM is allowed to riot, destroy cities, businesses, but painting over a BLM mural is a hate crime. Martinez, California

CNN has to race bait and point out that they were white:

20-07-21: CNN and New york times defend the rioters, say that “moms” have joined the protests:

20-07-22: Portland City Commissioner Jo Ann Hardesty said Wednesday she didn’t believe protesters in Portland are setting fires but that police are sending in “saboteurs” to create the strife.

20-07-23: AP defends the Portland BLM Antifa rioters. Says mayor Wheeler was tear gassed for being at a “protest” whereas federal agents are defending the courthouse from rioters and he was there for a photo op.

20-07-24: Leftists and MSM spew propaganda about “wall of vets” and “wall of moms” who joined the Portland BLM / Antifa protests – no social distancing concerns here.

20-07-26: ABC “news” – Protesters in California set fire to a courthouse damaged a police station and assaulted officers after a PEACEFUL demonstration intensified

The firework came whizzing over the fence so fast that the agent didn’t have time to move.

It exploded with a boom, leaving his hearing deadened and bloody gashes on both forearms. Stunned, with help from his cohorts, he stripped to his boxer shorts and a black T-shirt so his wounds could be examined and photographed for evidence.

He told his fellow agents he was more worried about his hearing than about the gouges and burns on his arms.

By the end of the night, five other federal agents would be injured, including another who got a concussion when he was hit in the head with a commercial-grade firework. One agent was hospitalized. Several agents have lingering vision problems from the lasers.

After each night of protest, they seize dozens of homemade shields, slingshots, blocks of wood and chunks of concrete.

“My friends have been hit in the head with hammers. I know people who have been shot with fireworks. It’s disgusting,” said the Deputy U.S. Marshal who’s been at the courthouse for weeks. “I’ve never thought I’d have to walk around in my office building wearing a gas mask to go sit in front of my computer.”

20-07-29: U.S Attorney for Oregon Billy Williams gets irritated by biased media who refuse to accurately describe the criminal behavior of rioters trying to burn down the Portland federal courthouse.

20-07-31: The Guardian on Trump wanting to delay election – “it’s what autocrats do, a challenge for democracy itself”. When Jacinda Ardern wants to delay election: “she appears magnanimous and conciliatory”

On one night, for example, individuals screwed the doors of our North Precinct station shut, barricaded other entrances and lit the station on fire with people inside. Nearby businesses, owned by people of color, were damaged and looted. On other nights, there were multiple attempts to breach the Justice Center. Other law enforcement facilities were targeted, including the union building, which was broken into and had fires set within.

20-08-13: Oregon State Police now pulling out from protecting federal courthouse in Portland – angry that DA not prosecuting most protesters arrested

20-08-14: Seattle BLM protesters demand white people ‘give up’ their homes

20-08-17: “We Sick of Yo’ White Ass!” Minnesota Dem Candidate John Thompson, who recently won the Democratic primary for the Minnesota House of Representatives District 67A Threatens white Americans During BLM Protest

20-08-19: BLM leader equates looting to actions of US government overseas, says US ‘steals diamonds and oils’ Hawk Newsome, the head of the New York branch of BLM, failed to condemn looting as an ethically questionable activity, says US government should ‘cut the check’ for reparations

20-08-21: Mostly blacks loot and riot, get arrested, Time magazine sympathetically talks about how “Young protesters, particularly those of color, face chilling consequences on top of prosecution”

Associated press propaganda and lies – their “fact check” says that There’s no evidence that Black Lives Matter or antifa, or any political group for that matter, is infiltrating racial injustice protests with violence.

20-08-29: Buzzfeed is suddenly concerned about lack of social distancing… during Trump’s RNC speech

20-08-29: New York Times concerned about social distancing at Trump speech but not march on Washington

Human Rights Campaign scolding Trump speech for no social distancing, then promotes and participates in march on washington

CNN contradicts themselves live on air

20-08-29: Leftist MSM all concerned about social distancing for coronavirus, but only during Trump’s RNC speech. The mass riots, protests, demonstrations and gatherings for BLM are OK.

20-08-31: Biden wants Trump to condemn the violence… which is what he’s been doing for months:

20-08-31: While leftists destroy cities, Biden wants Trump to call his supporters out to stop acting as an armed militia

ABC news Joe Biden gaslighting about how it’s Trump’s fault for the violence.

20-09-01: NY Times gaslighting – poor little protesters are now trying to keep themselves safe as right-wing groups decide to push back against their months of rioting and looting.

20-09-01: ‘Who Funds the Rioters?’ Is Not a Question the Federal Government Needs To Ask. The notion that the violent protests cropping up in U.S. cities are funded by a secret, shadowy cabal is a myth.

20-09-02: Protests are so peaceful that Ted Wheeler has to move out of his condo

20-09-05: ABC news and other media reporting on people not socially distancing but not reporting on violent leftist blm antifa rioters destroying cities and harassing people

20-09-09:  Kristina Narayan was arrested at the Portland antifa riot where firebombs were thrown at people. She’s the legislative dir. for the Ore Democrat speaker of the House Tina Kotek

20-09-21: Ruth bader ginsburg gets public funeral with public viewing – while regular people were not allowed to see their loved ones who died because of virus restrictions.

20-09-26: 100 days of Antifa blm rioting was ok, 1 day of actual peaceful protesting by proud boys and now Reuters panics about Portland a state of emergency

20-09-27: Propaganda ny times covers for blm terrorists by not even mentioning that the blm leader who tried to run over Trump supporters is part of blm