Classical music is literally White European people’s culture and history. You don’t go to India and talk about the “brown supremacy of Hindu music, that must give new weight to Asian composers, musicians, listeners” 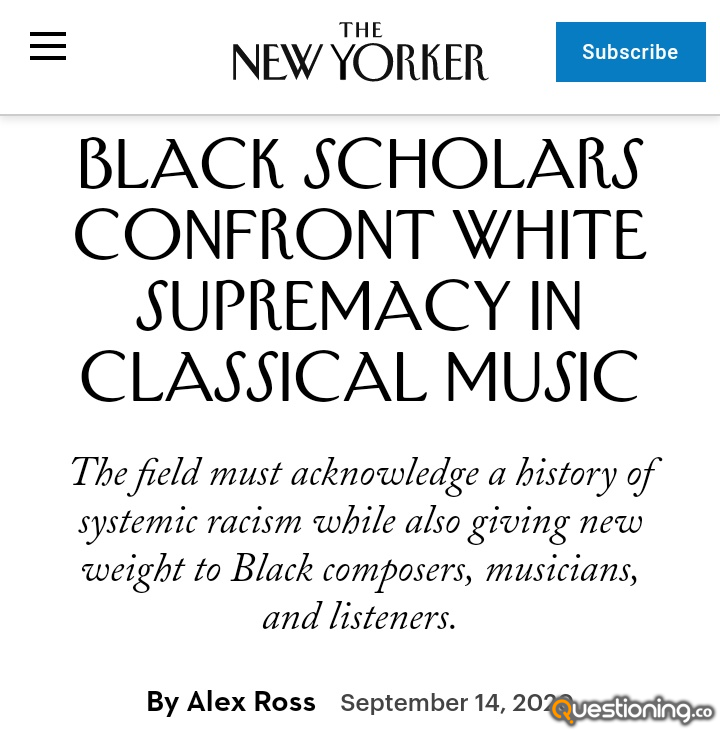 An article by Philip Ewell, who teaches at Hunter College. It begins with the sentence “Music theory is white,” and goes on to argue that the whiteness of the discipline is manifest not only in the lack of diversity in its membership but also in a deep-seated ideology of white supremacy, one that insidiously affects how music is analyzed and taught.

Shortly after Ewell’s article was published, a skirmish broke out in the music-theory community, incited not by the article itself but by a twenty-minute condensed version of the material that Ewell had presented at a conference seven months earlier. The Journal of Schenkerian Studies, which is based at the University of North Texas, chose to devote ninety pages to responses to that brief talk.

Some were supportive, others dismissive; one accused Ewell, who is African-American, of exhibiting “Black anti-Semitism,”

What Ewell calls “the white racial frame”—he takes the term from the sociologist Joe Feagin—has the special power of being invisible. Thurman, in her paper “Performing Lieder, Hearing Race,” makes a similar point: “Classical music, like whiteness itself, is frequently racially unmarked and presented as universal—until people of color start performing it.”

The hysterical complaints that Ewell was proposing to “cancel” the classical canon stemmed mainly from a blog post in which he called Beethoven an “above-average composer” who has been “propped up by the white-male frame, both consciously and subconsciously, with descriptors such as genius, master, and masterwork.”

“How dare white people idolize great composers, he was propped up only because of his white-male frame”