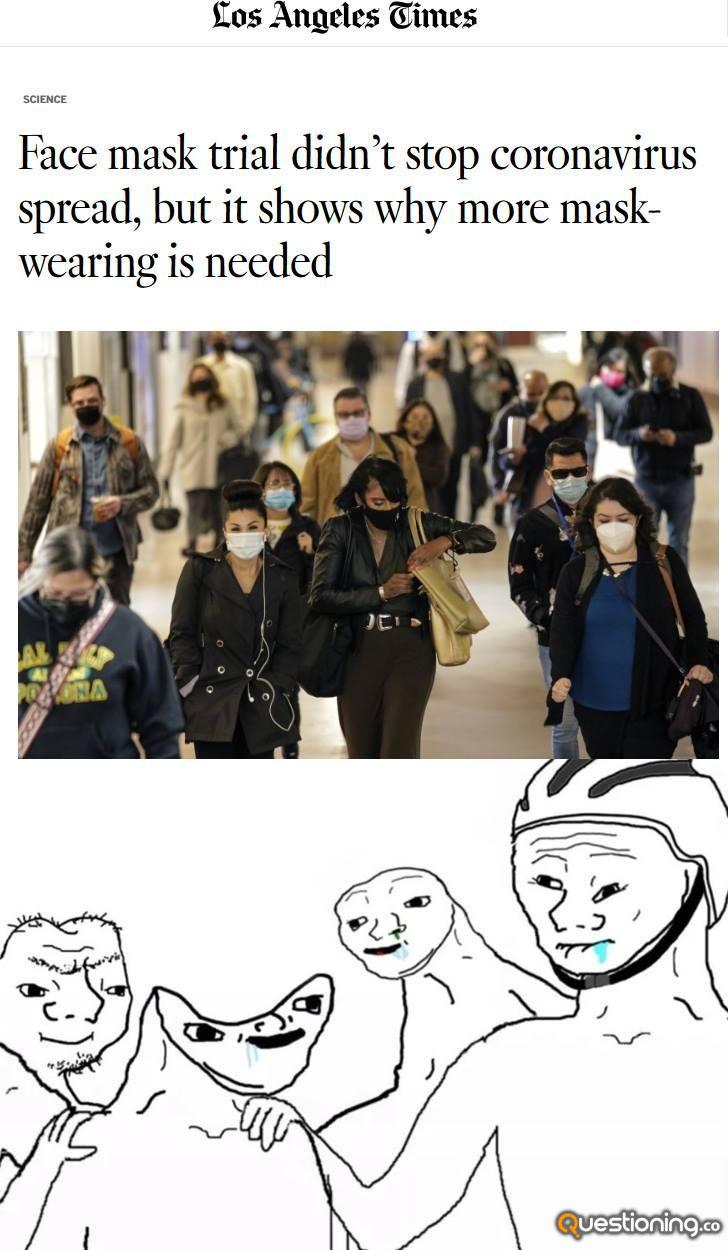 The researchers recruited more than 6,000 volunteers from around the country who spent at least three hours each day with people from other households and didn’t wear masks for their jobs. About half of these volunteers were chosen at random to receive 50 surgical masks and were asked to wear them whenever they left home for the next month. The other half did not get masks and served as controls.

Overall, 95 of the 4,862 volunteers who made it to the end of the study became infected with SARS-CoV-2, the coronavirus that causes COVID-19. That’s an infection rate of just under 2%.

But no matter how the researchers sliced and diced their data, they could not find a strong signal that the volunteers in the mask group were more protected than their counterparts in the control group.

In a typical clinical trial, this is the point where researchers would say their intervention didn’t work. But in this case, the investigators went the other way.

The problem, they said, wasn’t with the masks. The problem was that people didn’t use masks enough.

Trump has done his signal service for us again by hiring David Legates, for a top science position at NOAA.

Long-time readers will remember Legates. He allowed me to tag along on a few papers on the climate (example). The most infamous of which caused—I’m guessing—at least seven TIAs, three full strokes, seventeen angina attacks, and four fatal myocardial infarctions. This was “Why Models Run Hot: Results From An Irreducibly Simple Climate Model“, with lead author Christopher Monckton.

This peer-reviewed sensation made a simple claim: man, like all creatures, influences the climate; he is influencing this one, likely to the tune of a 1 degree C or so global temperature increase with a doubling of pre-industrial atmospheric carbon dioxide.

Strange, then, that NPR said “Longtime Climate Science Denier Hired At NOAA“. They said Legates, “a University of Delaware professor of climatology who has spent much of his career questioning basic tenets of climate science”.

Younger readers won’t recall that it used be the job of scientists to question basic, and even not-so-basic, tenets of science. That was how, in the old days, mistakes were recognized and progress made. All that has, of course, changed for the better. Tenets are now supplied by political agencies and are, as is proper, unquestionable.