Trump Lawyer Van Der Veen: ‘My Home Was Attacked,’ ‘My Entire Family, My Business, My Law Firm Are Under Siege Right Now’

Van Der Veen revealed it has come at a cost but would not elaborate beyond personal property damage and threats to his family and well-being.

“My home was attacked,” he said. “I’d rather not go into that. To answer your question, my entire family, my business, my law firm are under siege right now. I don’t really want to go into that, though. What I’d really like to do is talk about the merits of the case.”

The FBI is investigating an explosion and vandalism early Saturday at a Southern California church that has drawn protests over its controversial pastor and his anti-LGBTQ views.

A fire and explosion were reported shortly after 1 a.m. at First Works Baptist Church in El Monte, about 13 miles east of Los Angeles. Police responding to the scene saw smoke billowing from windows blown out from the blast and graffiti sprayed on the outside of the single-story brick building.

A South Carolina prosecutor says a 23-year-old man shot into a crowd of Trump supporters in late August. And — surprise, surprise — this is something our useless national media don’t want anyone to know about.

“A South Carolina prosecutor argued in court that Marquise Damarius Asomani intended to shoot at the people,” reported the Rock Hill Herald. “However, the lawyer representing Asomani said her client, and others in the car, were ‘unwise,’ but there was no intent to hurt anyone.”

Unwise as far as what? Pointing a firearm at a group of people over their support for President Trump? And then pulling the trigger a few times?

According to the media report, the alleged victims were returning from or heading to a Trump speech in Charlotte, North Carolina. They were out having a good time, had their Trump flags flying, and this guy allegedly came along the other way and fired at them at least four times.

Luckily no one was hurt, but according to local media there is video of the incident, and it shows Asomani “firing from the car.”

Seattle – Two people arrested on the BNSF Railway tracks near Bellingham, Whatcom County, were charged with terrorist attack and other violence against a railroad carrier, and appeared in federal court today, announced U.S. Attorney Brian T. Moran. Samantha Brooks, 27, and Ellen Reiche, 23, both of Bellingham, Washington, were arrested Saturday night in Bellingham as they allegedly placed a ‘shunt’ on the tracks. A shunt disrupts the low level electrical current on the tracks and can disable various safety features.

“Since January there have been 41 incidents of shunts placed on the BNSF tracks in Whatcom and Skagit counties—causing crossing guards to malfunction, interfering with automatic breaking systems, and, in one case, causing the near-derailment of tanks of hazardous chemicals,” said U.S. Attorney Moran. “These crimes endanger our community. I commend the agents from Customs and Border Protection, FBI, BNSF Police, and state and local partners who prioritized stopping this criminal conduct.”

According to the criminal complaint, the FBI’s Joint Terrorism Task Force has been investigating the placement of shunts on the BNSF tracks since January 19, 2020. The shunt is comprised of wire and magnets that are stretched between the tracks, disrupting the systems that indicate a train is on the tracks. On ten occasions, shunts were placed in areas that disrupt the crossing guards where the tracks cross streets, so vehicles could have tried to cross the tracks unaware of the oncoming train. On the night of October 11, 2020, multiple shunts were placed in three different locations in Whatcom and Skagit Counties. The shunts triggered an automatic breaking system on a train that was transporting hazardous and combustible material. The emergency breaking then caused a portion of the train to decouple from the engine. Decoupling has the potential to cause a derailment—in this case—of tanker cars of flammable gas in a residential area.

Shortly after the first shunts were discovered in January, a claim of responsibility was published on an anarchist website.

“This claim of responsibility stated that the shunting activity was carried out in solidarity with Native American tribes in Canada seeking to prevent the construction of an oil pipeline across British Columbia, and with the express goal of disrupting BNSF operations and supplies for the pipeline,” says the complaint.

Totalitarian AOC wants to put Trump supporters on a list 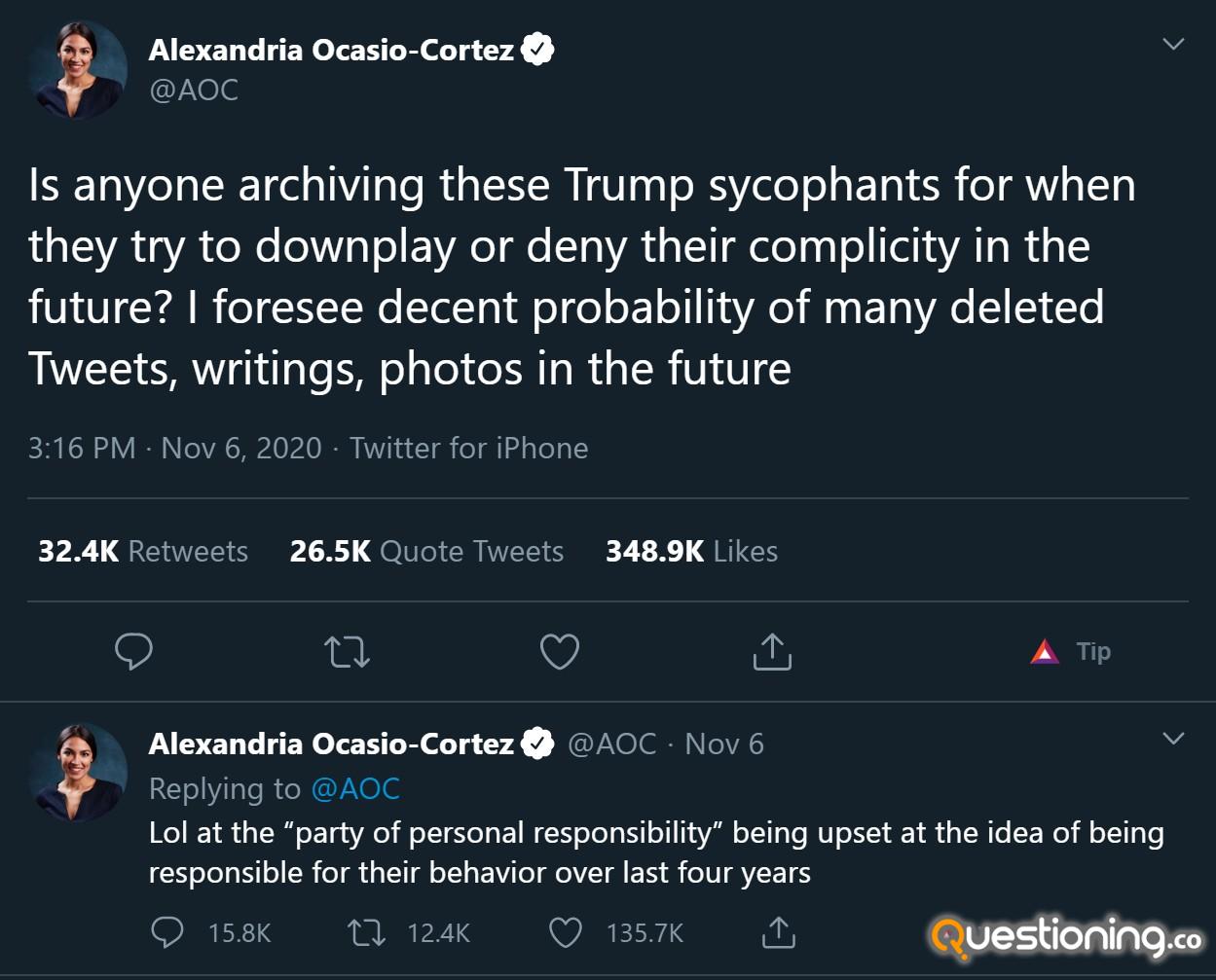 Left ring terrorism: Chicago; three dozen cold-blooded street gangs “have formed a pact to ‘shoot on-sight any cop that has a weapon drawn on any subject in public’

A federal intelligence alert obtained by the ABC7 I-Team has gone out to Chicago-area law enforcement with an ominous warning: nearly three dozen cold-blooded street gangs “have formed a pact to ‘shoot on-sight any cop that has a weapon drawn on any subject in public’.”The “situational information report” from FBI officials in Chicago dated August 26, 2020, states “members of these gang factions have been actively searching for, and filming, police officers in performance of their official duties. The purpose of which is to catch on film an officer drawing his/her weapon on any subject and the subsequent ‘shoot on-site’ of said officer, in order to garner national media attention.”