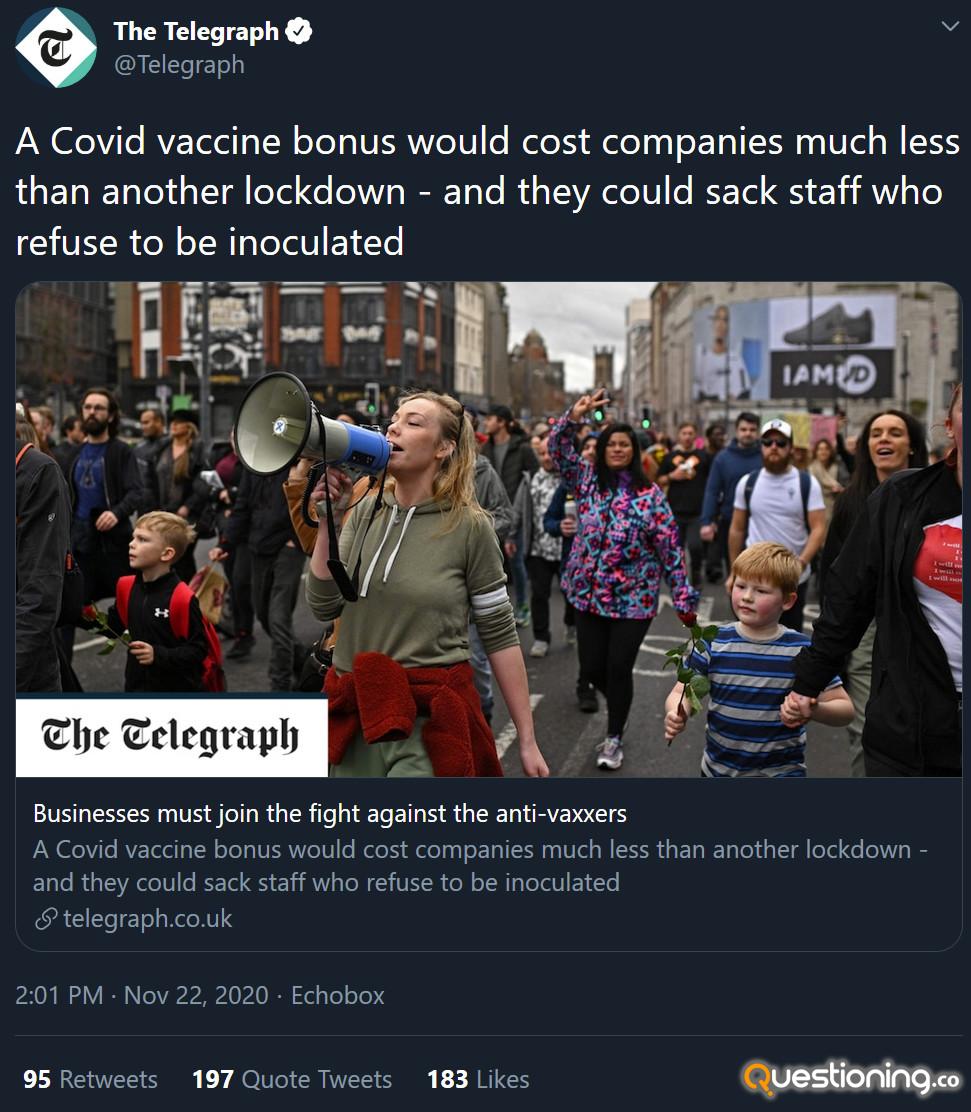 The tests are close to completion. The trial data is almost ready. And the paperwork will be filed with the regulators soon. We may be just a few weeks away from the approval of the first vaccine for Covid-19.

A couple of shots to the arm, and we will be out of this crisis. Shops, restaurants and gyms can reopen, and we can all put this whole nightmare behind us.

There is just one flaw in that rosiest of all possible scenarios: a lot of people don’t want to take the vaccine. And if not enough people take it, then we can’t reach herd immunity and the virus will remain a constant threat.

Government has a big role to play in persuading us all to sign up to a shot. So do scientists, celebrities and anyone with a public voice. Most of all, however, businesses need to take on the anti-vaxxers.

Like how? Offer time off, and workplace vaccination centres; offer a bonus for getting injected; fire anyone who refuses, and who can’t come back to work; and refuse to serve the unvaccinated.

Surveys suggest 30pc to 40pc of people don’t want to take a shot. Anti-vaxxer propaganda is spreading all the time, creating fear and nervousness. But unless a critical number of people take it, the vaccine won’t solve the crisis.

Coronavirus vaccine concerns – Components of mRNA Technology “Could Lead to Significant Adverse Events in One or More of Our Clinical Trials,” says Moderna

In comments not generally seen by the public, Moderna stated (p. 33):

[T]here can be no assurance that our lipid nanoparticles (LNPs) will not have undesired effects. Our LNPs could contribute, in whole or in part, to one or more of the following: immune reactions, infusion reactions, complement reactions, opsonation reactions, antibody reactions . . . or reactions to the PEG from some lipids or PEG otherwise associated with the LNP. Certain aspects of our investigational medicines may induce immune reactions from either the mRNA or the lipid as well as adverse reactions within liver pathways or degradation of the mRNA or the LNP, any of which could lead to significant adverse events in one or more of our clinical trials. [Emphases and links added]

“We’ll just get rid of all the whites in the United States” – Carol J Baker, Baylor College of Medicine & Texas Children’s Hospital

Carol J. Baker has the solution to vaccine refusers “We’ll just get rid of all the whites in the US”

Such an observation may seem counterintuitive, but it is possible that influenza vaccines alter our immune systems non-specifically to increase susceptibility to other infections; this has been observed with DTP and other vaccines. (Benn et al, Trends in Immunology, May 2013) There are other immune mechanisms that might also explain the observation.

Bill was passed unanimously. They will even hide it from the parent’s insurance documents so they won’t know.

WASHINGTON — The D.C. Council is inching closer to approving a bill that would allow children as young as 11 years old to get recommended vaccines without their parent’s approval. There would be some requirements, but direction overall would come from a doctor. A final vote from the council is expected Tuesday.

When Ward 3 Councilmember Mary Cheh introduced the Minor Consent for Vaccinations Amendment Act of 2019, it was in response to a measles outbreak that spread from coast to coast in the U.S.

At the time, many wondered if the District would become the next hot spot as vaccination rates trended downward in the city.

“I think it should be worrisome to people when children are not vaccinated for these diseases,” Cheh said.

The bill would give kids as young as 11 years old the green light to get a vaccination without parental consent if a doctor recommends it. The doctor would also determine if the child meets a certain standard of “informed consent” before administering the vaccine.

To prevent the parents from knowing, health providers would be required to bill insurers directly and send vaccination records to the school.

“The gateway again is the physician who has to make this judgment that ‘is that person, 11,12, 15, 18 capable of giving informed consent and is it consistent with the physician’s medical judgment?’ ” Cheh said.

Asha Pinkney Gillus has a 5-year-old daughter and a 14-year-old son. She tells WUSA9 the measure is concerning to her household.

She does not believe her teenager is old enough or “emotionally ready” to make decisions, without her help.

“I am 100% against that [the bill],” Gillus said. “I think it violates my fundamental right as a parent to manage the upbringing and the health and welfare of my child.”

“If my child goes and gets a vaccination and has an adverse reaction to that vaccination, I won’t know what’s going on because I’ve never been told my child has been inoculated,” Gillus said.

According to a July 6 letter to D.C. School leaders from the Office of the State Superintendent of Education, fewer families have paid visits to the doctor’s office because of the pandemic. Officials cite a lack of access to care and families avoiding offices overall.

Lots of research and studies from dr. seneff: http://people.csail.mit.edu/seneff/

Doctors and Scientists with Concerns About Vaccines

A Stanford professor has found that the federal Vaccine Injury Compensation Program has not lived up its original goals of providing “simple justice” to children injured by vaccines. Lengthy delays and an adversarial tone characterize the program. http://news.stanford.edu/news/2015/july/vaccine-court-engstrom-070615.html

First They Came for the Anti-Vaxxers

Graph of falling measles rates in Canada before vaccination: http://i.imgur.com/k6qs6tO.png

Effectiveness and are the anti-vaxxers to blame?

…discovered something truly disturbing about the MMR vaccine: it leads to detectable measles infection in the vast majority of those who receive it. Researchers analyzed urine samples from newly MMR vaccinated 15-month-old children and young adults and reported their eye-opening results as following:

when the varicella vaccine came out, the WHO and CDC knew that it would likely increase shingles cases. Shingles is re-emergence of the varicella virus in the body, but periodic exposure to environmental varicella actually keeps the immune system “up to date” in order to stop shingles.This is one reason why Britain refused to vaccinate against varicella.<–some guy

In over 95% of the time, polio presents with the following symptoms: slight fever, malaise, headache, sore throat, and vomiting.  These start 3-5 days after exposure and recovery is 24-72 hours with a result of lifetime immunity. The remaining 3% was non-paralytic polio.  This presented for 2-10 days as high fever, severe headache, stiff neck, hyperesthesia/parasthesia in extremities and some asymmetrical limb weakness.  Take this list of symptoms to your doctor and you will probably get a label of meningitis, not polio.

Vaccines need to be studied longer. They are usually studied only a few months after injection:

If, as the mandatory vaccination proponents contend, we can demand that everyone around us take every conceivable precaution against every communicable disease, what else can we demand of them?

For starters, the recently vaccinated (with live-virus vaccines) should be excluded from all public property. And if not, why not? They pose far more of a risk than does anyone who has simply not been vaccinated. What are some other risky practices Americans should no longer tolerate from each other? Going out in public with a cold? Being a poor driver? Being in possession of any substance that might cause a severe allergic reaction in someone else?

How about superbugs? What are we going to do about all those people who abuse antibiotics, ultimately leading to the creation of superbugs. Antibiotic-resistant bacteria are responsible for nearly 15,000 deaths in the US each year, far outstripping pre-vaccine deaths for measles, mumps and whooping cough combined. Can we not hold the irresponsible people who take antibiotics every time they have a minor infection accountable for this?

Additional studies not added to this page yet:

Absolute risk, simply explained, is “the likelihood that an outcome will occur.” Relative risk “compares the risk of a health event … among one group with the risk among another group.”

When one does the math, the Pfizer clinical trial numbers showed: “The risk reduction in absolute terms [was] only 0.7%, from an already very low risk of 0.74% [in the placebo group] to a minimal risk of 0.04% [in the vaccine group].” (Dividing 0.7 — the difference between the two groups — by 0.74 is the mathematical calculation that produced the touted “95% effective” number).

Although the eight versus 162 PCR-confirmed COVID cases in the Pfizer trial may sound like a big difference to the casual reader, Peter Doshi subsequently alerted the public to the fact that Pfizer skewed its analysis by excluding more than 3,400 individuals with non-PCR-confirmed symptoms of COVID — individuals split almost evenly across the vaccine and placebo groups.

Excluding “suspected” cases of COVID because they didn’t meet the PCR threshold:

All attention has focused on the dramatic efficacy results: Pfizer reported 170 PCR confirmed COVID-19 cases, split 8 to 162 between vaccine and placebo groups. But these numbers were dwarfed by a category of disease called “suspected COVID-19”—those with symptomatic COVID-19 that were not PCR confirmed. According to FDA’s report on Pfizer’s vaccine, there were “3410 total cases of suspected, but unconfirmed COVID-19 in the overall study population, 1594 occurred in the vaccine group vs. 1816 in the placebo group.”

Excluding all kinds of critical data from their public report:

an analysis of severe disease irrespective of etiologic agent—namely, rates of hospitalizations, ICU cases, and deaths amongst trial participants—seems warranted, and is the only way to assess the vaccines’ real ability to take the edge off the pandemic. There is a clear need for data to answer these questions, but Pfizer’s 92-page report didn’t mention the 3410 “suspected COVID-19” cases. Nor did its publication in the New England Journal of Medicine. Nor did any of the reports on Moderna’s vaccine. The only source that appears to have reported it is FDA’s review of Pfizer’s vaccine.

Another reason we need more data is to analyse an unexplained detail found in a table of FDA’s review of Pfizer’s vaccine: 371 individuals excluded from the efficacy analysis for “important protocol deviations on or prior to 7 days after Dose 2.” What is concerning is the imbalance between randomized groups in the number of these excluded individuals: 311 from the vaccine group vs 60 on placebo. (In contrast, in Moderna’s trial, there were just 36 participants excluded from the efficacy analysis for “major protocol deviation”—12 vaccine group vs 24 placebo group.) What were these protocol deviations in Pfizer’s study, and why were there five times more participants excluded in the vaccine group?

Why did they do all this statistical manipulation and why are they hiding so much data from the public, you ask?

With 20 times more suspected than confirmed cases, this category of disease cannot be ignored simply because there was no positive PCR test result. Indeed this makes it all the more urgent to understand. A rough estimate of vaccine efficacy against developing COVID-19 symptoms, with or without a positive PCR test result, would be a relative risk reduction of 19% (see footnote)—far below the 50% effectiveness threshold for authorization set by regulators.