Salon writer thinks peaceful protests are the same as riots: I can’t get past the differences between the Minneapolis BLM protest and anti-lockdown protests

The vast majority of protesters weren’t violent and none were armed. But Minneapolis police showed up ready to rumble. News photos show the cops pouring out of vehicles fully clad in riot gear and as soon as a handful of protesters committed minor acts of property damage and threw some water bottles (the Star Tribune reports that peaceful protesters pleaded with others to stop the vandalism), cops used that as a pretext to shoot tear-gas canisters into the crowd.

Could it be that cops knew that these very peaceful BLM demonstrators will riot, so they were ready. And they were right. Minneapolis had a massive riot, multiple stores and buildings were looted and burned to the ground.

But what I can’t get past — and judging from the reactions on social media, I’m not alone — is how wildly different that scene played out compared to the astroturf anti-lockdown protests staged in various state capitals across the country over the past month or so.

In places like Lansing, Michigan, and Columbus, Ohio, right-wing protesters have showed up literally armed to the hilt, carrying assault rifles and menacing state legislators who were simply trying balance public safety and the economic needs of their citizens. In Michigan, protesters literally stormed the state capitol and stood in the galley with guns, in an obvious effort to intimidate the politicians below.

Could it be that those white people with guns pose no threat? There was not a riot, no looting, no damage done.

No doubt liberals are in danger of letting conservatives drag them into a nitpicky, line-by-line debate over what constitutes “peaceful protest” and who started what in Minneapolis. But there’s no reason to get into that.

The question isn’t whether white identity politics and racism are fueling the protests. The real question is why. Racism isn’t some kind of magical force that shields your body from the coronavirus. Even Donald “Inject Bleach” Trump hasn’t been fool enough to suggest you can defeat the virus by wrapping yourself in the Confederate flag. Yet there’s no denying that there’s a direct correlation between racist attitudes and the belief that the coronavirus is an overblown hoax and the lockdowns are the result of a widespread leftist conspiracy.

That isn’t just true of the protesters, either. The most prominent voices in media and politics who are egging them on and denouncing stay-at-home orders also happen to be the people who are doing their utmost to mainstream white nationalist ideology.

Salon: Charleston church massacre: The violence white America must answer for – Muslims don’t need to apologize for the Tsarnaevs 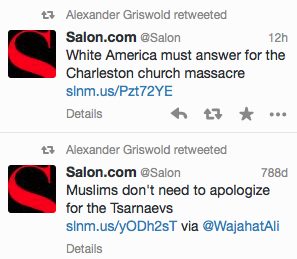