The need to protect the internet from ‘astroturfing’ grows ever more urgent The tobacco industry does it, the US Air Force clearly wants to. Astroturfing – the use of sophisticated software to drown out real people on web forums – is on the rise. How do we stop it?

HBGary: Automated social media management is creating an army of sockpuppets, with sophisticated “persona management” software that allows a small team of only a few people to appear to be many, while keeping the personas from accidentally cross-contaminating each other. Then, to top it off, the team can actually automate some functions so one persona can appear to be an entire Brooks Brothers riot online. This confirms that in fact, the US Gov. is attempting to use this kind of technology.

The Jews are so dominant, I had to scour the trades to come up with six Gentiles in high positions at entertainment companies. As a proud Jew, I want America to know about our accomplishment. Yes, we control Hollywood. Without us, you’d be flipping between “The 700 Club” and “Davey and Goliath” on TV all day.

“That’s a very dangerous phrase, ‘Jews control Hollywood.’ What is true is that there are a lot of Jews in Hollywood,” ADL Chairman Abe Foxman said. Instead of “control,” Foxman would prefer people say that many executives in the industry “happen to be Jewish,” as in “all eight major film studios are run by men who happen to be Jewish.”

Mohammed Reza Taheri-azar, an Iranian-American, intentionally, as he confessed, hit people with a sport utility vehicle on the campus of the University of North Carolina (UNC) at Chapel Hill

Mohammed Reza Taheri-azar, an Iranian-American, intentionally, as he confessed, hit people with a sport utility vehicle on the campus of the University of North Carolina (UNC) at Chapel Hill to “avenge the deaths of Muslims worldwide” and to “punish” the United States government.  He pleaded guilty to nine counts of attempted first-degree murder. only sentenced to 33 years in prison, on two counts of attempted murder.

Black “activist”: the solution to many of the problems faced by black people is the extermination of “white people off the face of the planet.”

A Raleigh activist and bookstore owner told a panel at Howard University Law School on Oct. 14 that the solution to many of the problems faced by black people is the extermination of “white people off the face of the planet.” Dr. Kamau Kambon, who taught Africana Studies 241 in the Spring 2005 semester at North Carolina State University, also said this needs to be done “because white people want to kill us.”

The war in Iraq was conceived by 25 neoconservative intellectuals, most of them Jewish 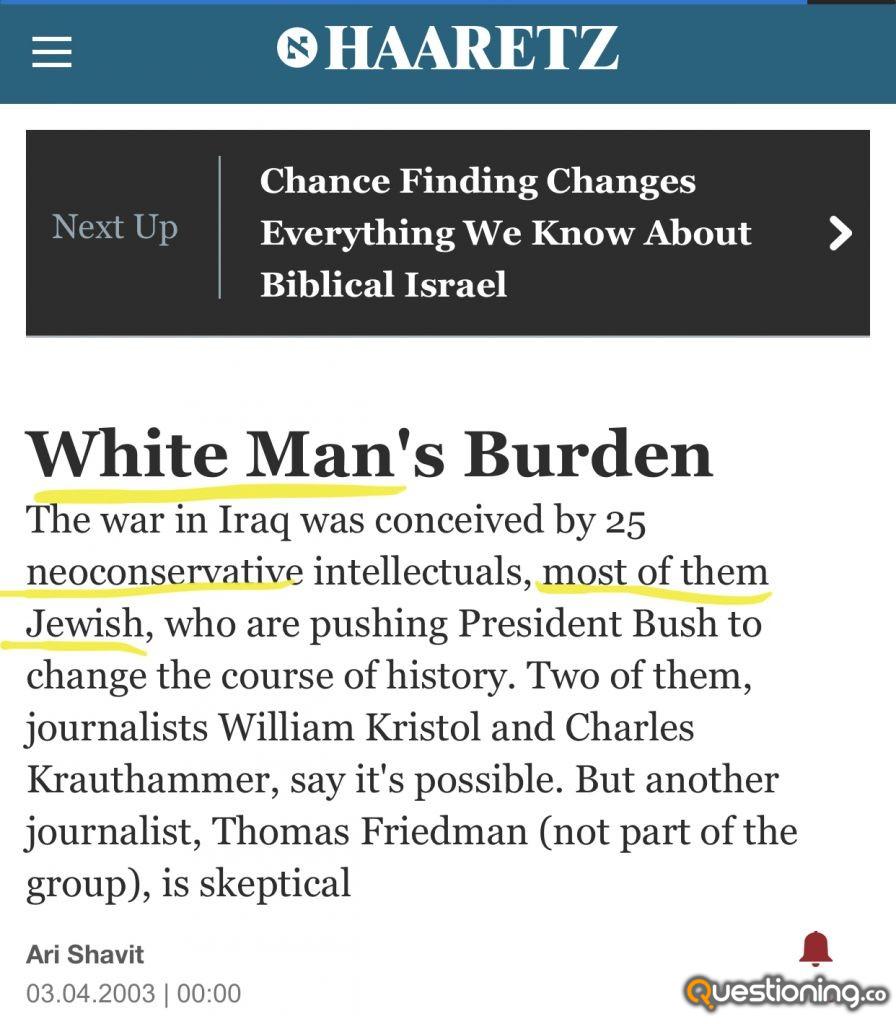 In the course of the past year, a new belief has emerged in the town: the belief in war against Iraq. That ardent faith was disseminated by a small group of 25 or 30 neoconservatives, almost all of them Jewish, almost all of them intellectuals (a partial list: Richard Perle, Paul Wolfowitz, Douglas Feith, William Kristol, Eliot Abrams, Charles Krauthammer), people who are mutual friends and cultivate one another and are convinced that political ideas are a major driving force of history.

The last days of a white world

Anglo-Saxon whites are already a minority in Hawaii and the District of Columbia. Now they are an ethnic minority in the country’s most populous state, the one most usually identified with the American dream.

‘It’s my hope we can all see our state’s diversity as a cause for celebration and not consternation,’ said California’s lieutenant governor, Cruz Bustamente, a Latino. Robert Newby, a white shop-owner who has lived in Los Angeles for 40 years, echoed his optimism: ‘This confirms what most of us have thought for years. I am happy for there to be more immigrants – by and large they work harder and have more money to spend.’

As recently as 1970, eight out of 10 Californians were white. Fuelled by immigration at its highest rate since the start of the last century, and higher fertility rates, the Asian and Latino populations of California have risen by almost a third since 1990. At the same time, with limited immigration and low birth rates, the population of non-hispanic whites has fallen by 3 per cent. By 2040, hispanics are expected to be the overall majority in the state.

Where California goes, the rest of America is predicted to follow. At present 72 per cent of the US population is non-hispanic whites; the US Census Bureau predicts they will become a minority between 2055 and 2060.