When it comes to their dating lives, it turns out that some of the biggest anti-white activists may not hate white people so much, after all. Twitter users are roundly mocking figures ranging from Ilhan Omar, to Cambridge professor Priyamvada Gopal, to Washington Post editor Karen Attiah for their dating preferences.

Politics does indeed make strange bedfellows. It is not altogether clear why white men play such a privileged role in the dating lives of “woke” non-white activists. We will keep you updated on this important story moving forward.

Urooj Rahman and Colinford Mattis, the two attorneys, were both repeat donors to Sanders’s campaign, according to FEC records, which show that Mattis also donated to Democratic billionaire Tom Steyer’s 2020 presidential campaign.

Fake News Yahoo: How the coronavirus undid Florida Gov. Ron DeSantis. [Florida is one of the least affected states]

Extremely biased article. This is “news”?

Long before the coronavirus outbreak turned him into one of the least popular governors in the nation, Gov. DeSantis of Florida was something of a conservative golden boy.

There was the time Gov. Ron DeSantis showed up at a coronavirus press conference in a solitary rubber glove, proceeding to repeatedly touch his face with the other, ungloved hand. And there was the time he went through heroic struggles in trying to put on a respirator, its straps providing perhaps more of a challenge than they should have.

“We’ve got deaths stacking up in South Florida like crazy,” says Rick Wilson, a Republican consultant. The virus has killed 750 people in the three counties at the state’s southern tip (Broward, Miami-Dade and Palm Beach), which is three times more than have died from COVID-19 in all of South Korea.

DeSantis responds to the fake news:

On Tuesday, the National Research Council, for reasons that were not made quite clear, entered into an agreement, the exact details of which Canadians are apparently unentitled to know, with a Chinese entity known as CanSino Biologics Inc., in a project backed by the Institute of Biotechnology in China’s Academy of Military Medical Sciences. The deal commits Canadian researchers to the development of a vaccine for COVID-19, the disease caused by SARS-CoV-2, the deadly virus that Chinese authorities, by gross negligence and disinformation, in roughly equal measure, unleashed upon the world late last year.

The National Research Council, it might be remembered, was badly hacked in 2014, or in the federal bureaucracy’s lexicon, was made “a victim of Chinese computer network exploitation activities,” and the vandalism ended up costing taxpayers hundreds of millions of dollars to repair. But hey, bygones.

But Ottawa hasn’t yet found the courage to say no to Huawei, or to join the United States, the European Union, Japan, Australia, New Zealand and the United Kingdom in the audacious notion that, you know, maybe there should be an independent inquiry into how the hell this pandemic happened. China is offended by the proposition and opposes it. The World Health Organization, its credibility shot, is also against it. So Trudeau is keeping quiet.

Trudeau has also declined to address the horrifying results of an in-depth investigation Amnesty International carried out in a collaboration with the Canadian Coalition on Human Rights in China that details the “bullying, racist, bigoted” campaign waged by Beijing’s proxies in Canada.

New York has mismanaged COVID-19 from top to bottom So why is Andrew Cuomo’s popularity at an all time high?

Andrew Cuomo is having the time of his life. His approval ratings are through the roof and he’s being talked about as a replacement for Joe Biden should Joe wander off somewhere without his Visiting Angel, never to be found again. Hipster merchandise featuring his face is exploding on Etsy and he’s getting a nightly hour with his own brother on CNN to chat about oh, this and that, and whatever is happening in his day at the given moment. It’s quite the arrangement! Andrew doesn’t ask his brother why he broke quarantine, literally endangering lives and the younger Fredo doesn’t ask him about 1,700 previously uncounted COVID related deaths in New York nursing homes, or why he didn’t authorize disinfecting subway cars until early May, a full 90 days after the first cases were reported on March 1.

Governors in Florida, Texas and Georgia bear the brunt of media criticism for their handling of testing, shutdowns and hospitalizations. In each instance, no outbreak or death count in those states has come close to matching New York. National media went to plaid over Jacksonville’s reopened beaches, while glossing over the hordes of impatient hipsters grouping together throughout New York parks, the entire time lavishing praise on the governor of the moment.

Page in progress, will be updated with more info. 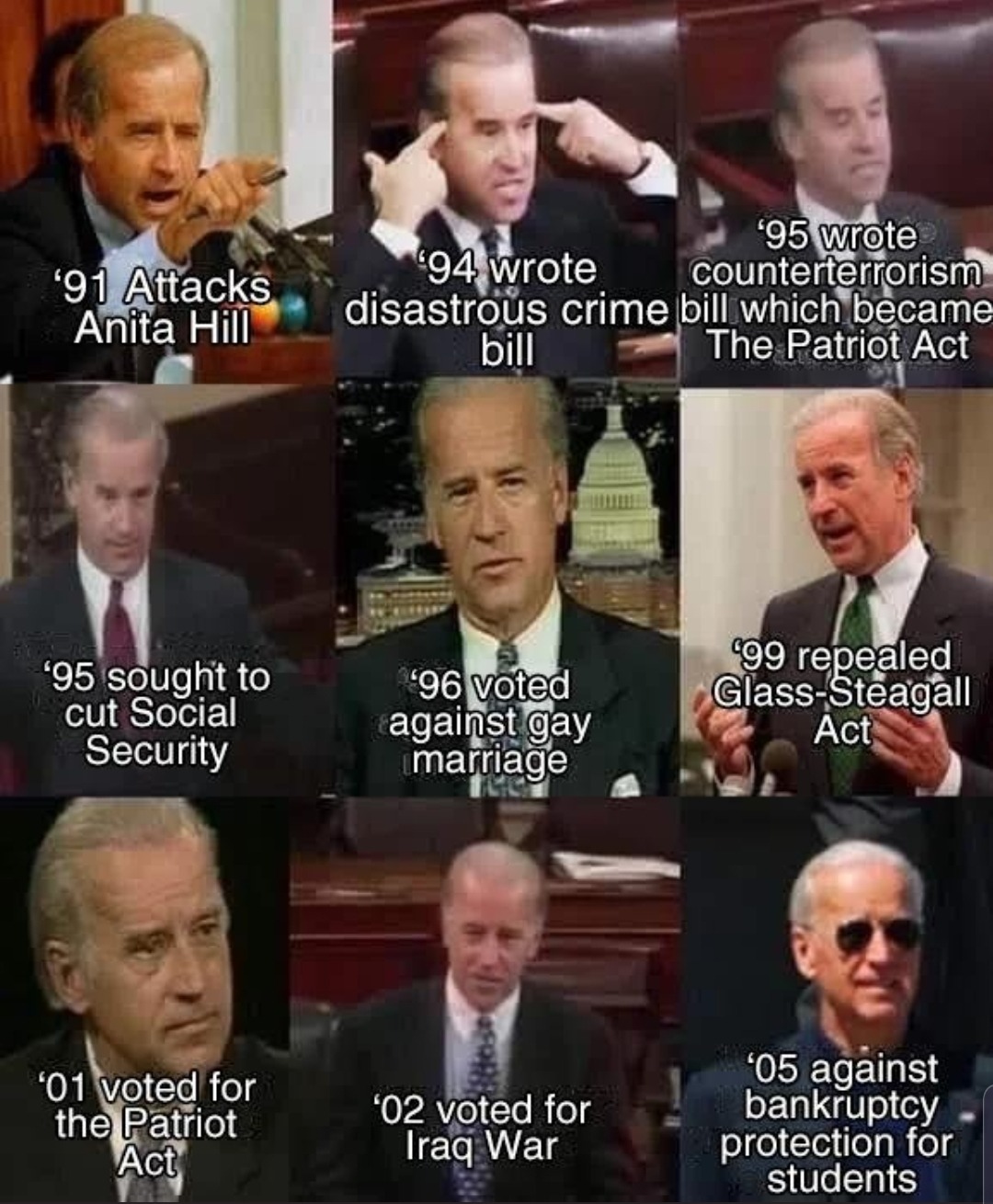 END_OF_DOCUMENT_TOKEN_TO_BE_REPLACED

The Hypocrisy on Tara Reade Is a National Disgrace

We do not know whether the accusations that Tara Reade has leveled against Joe Biden are true or false. That is a question of evidence and of inquiry that might be answered as time rolls on. We do know, by contrast, that the double standard that has been exhibited by Biden’s campaign and by the political press in tandem is a national disgrace. Both culturally and legally, due process must be habitually applied to nobody or to everyone. If, upon the most frivolous and protean of pretexts, it is routinely accorded to one faction while being denied to another, it is effectively lost.

House Speaker Nancy Pelosi deleted a video of herself walking around in Chinatown on February 24 downplaying the Coronavirus.

Pelosi walked around Chinatown in San Francisco on February 24 after Coronavirus cases had already been confirmed in the US, prompting Trump to restrict flights from China.

President Trump blasted Pelosi for walking around Chinatown encouraging people to shop and eat there a month after he restricted incoming flights from China.

Pelosi freaked and deleted the video of her saying, “We do want to say to people, come to Chinatown. Here we are…and come join us,” Pelosi said. Fears of the Coronavirus are “unwarranted in light of the precautions that are being taken here in the United States.”

No other allegation about sexual assault surfaced in the course of our reporting, nor did any former Biden staff corroborate Reade’s allegation. We found no pattern of sexual misconduct by Biden, beyond hugs, kisses and touching that women previously said made them uncomfortable

No other allegation about sexual assault surfaced in the course of our reporting, nor did any former Biden staff corroborate Reade’s allegation. We found no pattern of sexual misconduct by Biden, beyond hugs, kisses and touching that women previously said made them uncomfortable

Prominent Bernie bro Yusuf Naqvi tweets: “The best that can come of covid-19 is that all elderly conservatives die”

COVID deaths are disproportionately spiking in Black + Brown communities. Why? Because the chronic toll of redlining, environmental racism, wealth gap, etc. ARE underlying health conditions. Inequality is a comorbidity. COVID relief should be drafted with a lens of reparations. END_OF_DOCUMENT_TOKEN_TO_BE_REPLACED

Officials across the country this week warned that equipment shortfalls are placing health-care workers and vulnerable Canadians at growing risk of exposure to the virus.

A lack of supply and surging demand have sent prices soaring for goods from gowns to gloves, swabs and face shields. “One government had placed an order for 200 million masks from China. And what this did overnight to the price of masks was to treble them,” Evenett said.

END_OF_DOCUMENT_TOKEN_TO_BE_REPLACED

But 174 House Democrats — including House Majority Leader Steny Hoyer — did not support the legislation.

“When it was offered, overwhelmingly the majority of the House would like to see the TSA not hire terrorists or those who have been convicted of sexual misconduct with minors and others. But the socialist wing of the party, that controls now the Democratic Party, said that that could not be offered.”

“HOW MANY TIMES HAS THE PM MET WITH THE ETHICS COMMISSIONER”?

Trudeau is asked “HOW MANY TIMES HAS THE PM MET WITH THE ETHICS COMMISSIONER”? and weasels his way out every time.

“Blood is on your hands. Millions are dead in Iraq.”

Joe Biden cowardly walks away after a veteran confronts him about his support for the criminal #Iraq War.

Handwritten notes from Peter Strock implicate Biden and Obama directing FBI to investigate political opponent Gen. Flynn AFTER FBI agents submit that there is not enough evidence to continue investigation!

“According to Strzok’s notes, it appears that Vice President Biden personally raised the idea of the Logan Act,” defense lawyers Jesse Binnall and Sidney Powell wrote.

”That became an admitted pretext to investigate General Flynn.”

The revelation contradicts Biden’s claim of total ignorance regarding the Flynn probe when he was vice president, which he was asked about during a May 12 interview with ABC’s George Stephanopoulos.